Long story short: A few months ago, I wrote a jokey post for the now-defunct SportsBubbler site, in which I urged the Bucks\’ Brandon Jennings to stop tweeting.  Not so much because I wasn\’t dying to know what race of women he prefers to date, but because I didn’t want him to get himself suspended.  (Two days after I wrote the column, Jennings was fined by the NBA for tweeting too close to the end of the game.  Total BS, if you ask me.)

That column led to me exchanging some e-mails with writer Davy Rothbart, who was working on a story about Jennings for GQ Magazine.  He wanted to know if I had any background info on Jennings, or questions I would ask him for the story.  I unloaded a bunch of stuff to him, as I think Jennings is one of the rare athletes who will actually tell you what he thinks.

After publication of the GQ story, I got a care package from Rothbart.  Inside it was a note from Jennings.  Here it is: 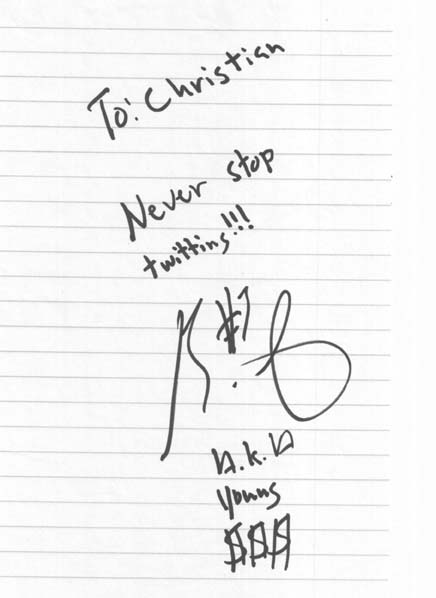 Of course, this is awesome on so many levels.  It’s clear he saw my column about his proclivity for ribald tweeting, but didn’t take it as me being critical of him.  And it appears he also has a sense of humor about the whole thing.  And finally, anyone who incorporates dollar signs into their own nickname is on another level.

So this will forever go on the memorabilia wall.  Many thanks to Davy Rothbart for getting Brandon to sign it.  And I hope that for the sake of everyone’s entertainment, Brandon never stops twitting.