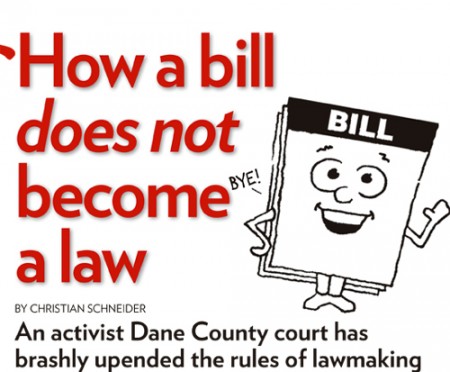 Every two years, the Wisconsin Assembly issues an activity book for schoolchildren. The book includes a cartoon called “How a Bill Becomes a Law,” which details the happy life of an ebullient piece of legislation named Bill.

Bill leads a simple life — all he wants to do is one day earn the governor’s signature on his belly and become law. The cartoon follows his traditional journey, from hearings held on his merits, to committees voting him out, to both houses of the Legislature passing him before sending him to the governor to become law.

Such has been the legislative process since Wisconsin’s inception in 1848. Yet in recent years, Bill’s celebration upon being signed by the governor would be a bit premature. Having lost control of the Legislature and the governorship, Wisconsin Democrats have added another step: To become law, Bill must first pay a visit to the Dane County Circuit Court.

Dane County has the distinction of not only being the home of state government; it is also indisputably one of the most politically liberal counties in America. And despite being only one of Wisconsin’s 69 state circuit courts, it has essentially become a second legislature.

Our friend Bill may have earned the imprimatur of legislators elected from all over the state and the signature of a governor elected by a majority of Wisconsin voters, but a single Dane County judge can derail Bill’s attempt to find a cozy home within the pages of the state’s statute books.

This is a problem not just for poor Bill, but also for the unfortunate citizens around Wisconsin who elect Republicans to the state Assembly, Senate and governorship. The ballots of millions are counteracted by the vote of one robed master elected by a strongly progressive electorate, whose elevated position is not earned by any specific legal skill or expertise, but instead his or her proximity to State Street. In fact, until recently, any lawsuit against the state of Wisconsin had to be filed in Dane County, giving its Circuit Court an elevated importance over any other local court in the state.

And thus, the Dane County Circuit Court has become a legal ATM for the state’s progressives: Insert a court challenge, and out comes a favorable opinion that will cost your opponents buckets of cash to appeal.

So-called “venue shopping” like this isn’t all that new. For instance, the federal court in Marshall, Texas, has been traditionally known to be friendly to those seeking money for patent infringements, and large companies from around the nation typically end up in this small Texas town. Quick trials and plaintiff-friendly juries are the norm in Marshall (as is its annual Fire Ant Festival), making it a popular vacation spot for lawyers.

Of course, picking a friendly federal appeals court is tricky, given that you have to predict what the lower courts are going to do. But those looking for anti-business outcomes are generally served well by filing cases in the jurisdiction of the notoriously liberal 9th U.S. Circuit Court of Appeals, which covers nine western states. In 2011, the U.S. Supreme Court either reversed or vacated 19 of the 26 cases it reviewed from the 9th Circuit; two years earlier, the supremes shot down 94 percent of its cases.

The Dane County Circuit Court has proven itself another great haven for liberal venue shoppers. In March 2011, it found itself in the middle of a national controversy when Dane County District Attorney Ismael Ozanne filed a lawsuit attempting to block implementation of Gov. Scott Walker’s new law restricting public sector collective bargaining. Unable to prevail legislatively, Democrats attempted to sink the bill in the courts. And they found a very sympathetic ear in Dane County Circuit Judge Maryann Sumi.

It was important that Democrats get a lawsuit moving quickly; on April 5, Supreme Court Justice David Prosser was up for election in a race that would decide the high court’s ideological balance. Having a case pending in a state court would bolster the impression that the Prosser election was really an election about whether Walker’s broadside to the public unions would stand.

On March 16, seven days after the Wisconsin Senate passed the collective bargaining bill, Ozanne filed a lawsuit seeking not to overturn the law, but to prevent it from being published in the first place. Two days later, Sumi heard one day’s worth of testimony, issued a temporary restraining order stopping publication of the law and quickly left town on a weeklong family vacation.

On his blog, Marquette University law professor Rick Esenberg said he was “astonished” at Sumi’s ruling, noting that in 1943, the state Supreme Court held that judges may not enjoin the publication of a law on the basis that it is or might be unconstitutional. “A bill, in the court’s view, is not enacted until it is published such that publication is part of the legislative process with which courts may not interfere,” noted Esenberg.

On April 5, Prosser narrowly defeated his liberal challenger, JoAnne Kloppenburg. On May 25, attorneys at the state Department of Justice sent Sumi a letter indicating that they might seek her recusal. The very next day, Sumi issued her opinion striking down the law in its entirety.

Within months, the state Supreme Court assumed its role as the state’s legal janitor and cleaned up the mess Sumi had made. (She ruled that the state Senate violated the open-meetings law, but failed to acknowledge the pertinent exemption for legislative actions.) In a contentious decision that led to accusations of justices choking each other, Prosser excoriated Sumi, writing, “In turbulent times, courts are expected to act with fairness and objectivity. They should serve as the impartial arbiters of legitimate legal issues. They should not insert themselves into controversies or exacerbate existing tensions.”

While the Supreme Court vacated Sumi’s decision, the pro-union litigants were not done. On Sept. 14, Dane County Circuit Judge Juan Colas once again struck down Walker’s law, this time based on a challenge from Madison schoolteachers and Milwaukee city employees. The ruling blocked the law from being applied to school and local government workers, but it remains in effect for state workers and employees of the University of Wisconsin System. The case is being appealed.

Yet another case of “Walker nullification” took place when Dane County Circuit Judge David Flanagan, who had signed the recall petition against Walker, struck down a Walker-approved law requiring photo identification to vote. Inexplicably, Flanagan did not disclose that he had signed the petition.

While the U.S. Supreme Court upheld a similar voter-identification law in Indiana, Flanagan ruled that his opinion should effectively trump the Supreme Court because the Indiana law allows a voter 10 days after casting a provisional ballot to produce identification, while the Wisconsin law allows only three days.

The fact that Dane County always got the first crack at adjudicating lawsuits against the state clearly irritated Republicans, who in 2011 passed a law allowing plaintiffs suing the state to pick venues other than Dane County. Legislative Republicans took advantage of this new law during the Walker recall process, when they sued the state Government Accountability Board in Waukesha County, which they considered a friendlier venue.

This new law, however, does nothing to stop liberal groups from filing suits in Dane County. Esenberg noted that constitutional challenges to enacted legislation are “nothing new,” and that challenges aren’t always illegitimate. But he notes that cases filed by Democrats in Dane County have become uniquely problematic, given that Dane is a “company town.”

“You have exceptionally politically charged cases being brought in a county which has this sort of this toxic combination of being both politically homogeneous and politically aroused,” said Esenberg. “You had these pieces of legislation coming before elected judges in a county where people were marching in the streets, pretty much all in opposition to these things, which raises questions about the political pressures that may be brought to bear on a judge who finds himself or herself in that situation.”

And while the ability of circuit courts to strike down state laws is not new, the recent hyper-partisan way in which the courts are being asked to function will have long-lasting impacts on Wisconsin law. Scott Walker and the GOP Legislature may only be with Wisconsin for the span of a few years; the precedent of litigating everything as a political weapon may be with the state forever.

Those ideological pressures placed on circuit courts will likely boil up again now that the Legislature has passed a much-discussed bill to allow an iron ore mine in northern Wisconsin. Environmental groups are expected to file suit at some point to block the mine. And that move for an injunction will almost certainly be filed in Dane County.

Some judicial observers have argued that it doesn’t matter where cases like this begin, as long as the Supreme Court is there to serve as a backstop to Dane County. For conservatives, this reasoning is problematic.

First, while the makeup of the court currently leans conservative, the court is usually only one April election away from switching ideologies. Liberals need but a single seat, in other words, to turn the court from a stop sign to a green light for Dane County opinions.

One thing is certain — the more the lower courts are seen as mere political arms, the worse it is for the reputation of the Supreme Court. Some conservatives have grown frustrated that the Supreme Court hasn’t yanked jurisdiction away from the appellate courts and struck down Flanagan’s photo identification ruling, for example.

But as one justice told me, that’s not at all how the Supreme Court should work. The court, instead, should almost always let the process work itself out. Setting a precedent of clutching politically expedient cases away from appellate courts could be terrible for the right, especially if liberals regain control of the Supreme Court.

In the wake of the recent Dane County decisions, the Republican Legislature has also proposed changes to how cases are handled. One proposal, for instance, would have prevented circuit courts from blocking duly enacted laws. Esenberg believes this would be a mistake, not only given that some laws should be invalidated, but also because politics are cyclical, and one day Republicans will need lower courts to block the actions of a Democratic governor.

Esenberg proposed a potential remedy for over-politicization of the courts: If a circuit court wants to issue an injunction to block a state statute, the party opposing the injunction has 10 days to appeal.

But regardless of what reforms might pass, Republicans will not be able to legislate Dane County out of existence. Challengers to Scott Walker’s agenda will continue to look to the Dane County courts to block the will of the people. And liberal judges will continue to garner awards like Sumi’s for being the State Bar of Wisconsin’s “2011 Judge of the Year.”

And this will be bad news for our good friend Bill, who will have to routinely pack his bags for Dane County. Maybe the state can get him some Badger football tickets to make his frequent stays more pleasant.