I Guess There’s Still Time to Repeal It

A few weeks ago, I appeared on the “Sunday Insight with Charlie Sykes” show, on which we discussed the recent statewide smoking ban going into effect.  During our discussion, I made a rather ineloquent point that fell well short of the threshold to be considered “humorous.”

The story goes like this – I go see a lot of bands in Madison.  Before the smoking ban went into effect in the city, you’d always go home smelling like smoke.  But since the ban, I’ve noticed something else at concerts.  Namely, when everyone is packed up near the stage, people actually really smell bad.  They’re drunk, they’re sweaty, they smell like patchouli and dog hair (it is Madison, after all), and a lot of them attempt the “one cheek sneak” in close quarters.  I quickly figured that I enjoyed the masking scent of cigarettes more than the actual smell of drunk Madison residents.

So, on the show, when asked what I thought of the Madison smoking ban, I simply said I opposed it “because people stink.”  And that was it.  Didn’t make much sense without any explanation, and it pretty much killed the discussion.

ANYWAY, I feel much better about my flub after reading this letter sent to a Wisconsin state legislator regarding the ban.  Please take the time to follow this air-tight logic.  (Click on the image to make it full screen.) 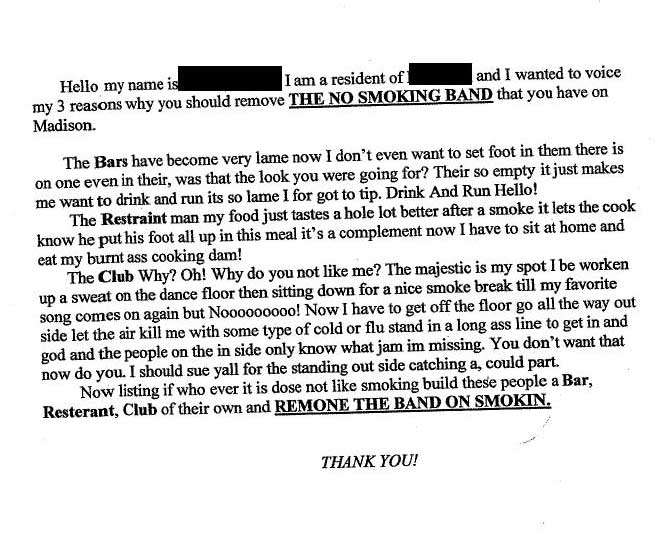 The Crazy World of Independent Candidates

Thinking Outside the Box: Ten Ways for Wisconsin Government to Raise More Revenue