Why Congress is Wigging Out 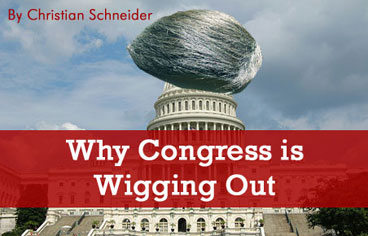 When men start to go bald, they basically have two options: they can man up, accept their fate and buy an expensive car, or they can try wearing a ridiculous toupee.

(I guess a third option is to get hair plugs – like they do in the Hair Club for Men. I love their ads, because they promise that I can go jet-skiing with my new hair – which is awesome, because I didn’t know how to jet ski before.)*

The thought process behind men wearing wigs is fascinating. They recognize that it looks ridiculous – there isn’t a person they pass on the street that doesn’t go “whoa – look at that rug!” But they do the internal calculus and determine that the fact they’re obviously wearing a toupee is preferable to the horrors of seeing the top of their scalp.

The examples of this are myriad. Everyone knows Elton John is a member of the Bald Brotherhood; yet he still shows up in concert wearing wigs that look like they formerly belonged to a cast member of “High School Musical.” Everyone seems to have forgotten that Jeremy Piven had less hair at age 28 than he does at age 43. And John Travolta’s ridiculous hairline goes up and down more often than John Edwards’ zipper. Yet all of them have determined that this is a better look than going natural.

(Incidentally, this is comparable to women who think having obvious plastic surgery is preferable to the horrors of aging naturally. Poor Meg Ryan, formerly as beautiful as the Mona Lisa, now looks like a Picasso.)

Members of Congress seem to be picking up on this meme. Congress’ favorability ratings barely hover above “having your lips stapled to a gorilla.” The American public is now fully aware Congress is incapable of creating jobs. Voters know that the House and Senate are going to raise their taxes and at the same time create government deficits as far as the eye can see, at the same time unemployment is in the double digits. (The chance that we all speak Chinese in 20 years currently stands at about 35%.)

And yet they have taken this dead animal carcass known as “health care” and stapled it securely to their heads. They think ramming through a government takeover of sixteen percent of the American economy is preferable to the way the public sees them now. Democrats in Congress honestly believe passing a partisan bill crafted in secret will give them the image makeover they need to maintain their large margins come election time.

When the health care takeover bill passes, your congressperson is going to come back to you brandishing their vote as if they’re a co-worker who magically gained a full head of hair overnight. They’re going to tell you that doing something was better than letting nature take its course. Yet unbeknownst to them, they will become even more of a laughingstock than when they started. Sadly, the cover Steve in human resources seeks only hurts him; the cover Congress is looking for could bring down the American economy.

So say it loud, my bald brothers – it’s nobody’s first choice to lose your hair, but trying to rectify it can make it worse. A lesson Congress should learn before they creep out voters for good.

NOTE: Be looking for the second portion of this series, “Why global warming is like a mustache.”

(Incidentally, when Congress does decide to purchase their toupee, I demand they do it at Morrie’s Wigs.)

Your Self-Defense Tip of the Day