So we all got excited on Sunday night watching the Packers graciously accept Jay Cutler’s gift wrapped win.  Football season is upon us – it’s time to ignore your wife and kids, wear the jerseys of players 15 years younger than you, stare blankly at fantasy stats on your computer all day, and scream expletives at the television for 12 straight hours on Sundays.  Seriously, if an alien dropped in on America between August and January, they would immediately deduce two things:

1. All Americans gather in front of their televisions every Sunday night to take their orders for next week from Al Michaels, and:

2. This magic elixir known as “alcohol” gives the jersey-wearing old men universal knowledge, and grants them power to speak extemporaneously about any worldly topic loudly and forcefully.

Perhaps you feel you are ready for the remainder of the season.  You have your Packer jerseys, inflatable seats, and cheeseheads at the ready.  Yet according to eBay, you have yet to scratch the surface of the wondrous products available to a rabid fan base.

What follows is a list of the 10 (or so) most ridiculous Green Bay Packer related items on eBay.  Sure, the online auction site is full of what you would expect: jerseys, hats, obscure Packer football cards (Ingle Martin rookie card, anyone?  Care for a Craig Newsome framed card? Longing for the simpler days of the George Teague era?), and Packer Mr. Potato heads.  (No – wait: that’s actually pretty cool.)  You can even buy a piece of one of Brian Brohm’s”game worn” jerseys, although it is unclear which game he wore it in.  I think they mean he wore it while playing Madden ’09 once. 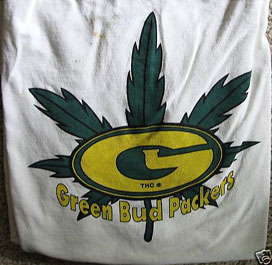 Like the Packers?  Like marijuana?  Then this is the shirt for you – flawlessly integrating the famed Packer logo with the famed image of a bong.  Of course, if you own this shirt, you will rarely actually make it out to Lambeau Field to show it off, since remaining on the couch and ordering junk on eBay always takes precedence when the Golden Girls is on. 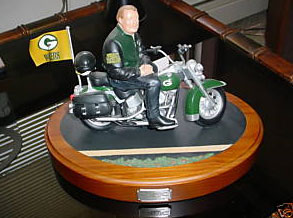 Sadly, you’re out of luck on this one – someone inexplicably just paid $60.00 to acquire this treasure.  So congrats to the big winner – on getting the statue, and for wearing your “Green Bud Packer” shirt for the fourth straight day. 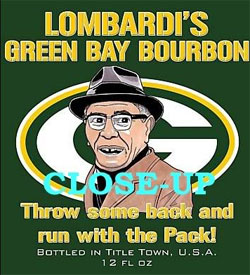 Last week, I complained bitterly about the use of Saint Vince’s visage to sell products.  And now, we have a bottle of “Vince Lombardi Bourbon,” with an atrocious hand drawn picture of Lombardi wearing an expression that closely resembles what the coach’s face may have looked like if he knew someone was using his name to sell this crappy booze.  (The ad says the artist has “masterfully captured Coach Lombardi in all his glory!)

Actually, this bottle is proof that Heaven doesn’t exist – if it did, Lombardi would have struck this guy with a lightning bolt by now.  Oh, and if you’re interested in more of the artist’s execrable Packer art, here’s some for you. 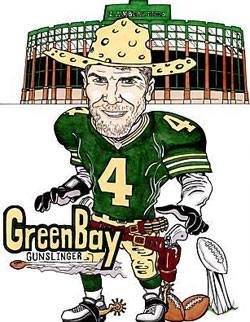 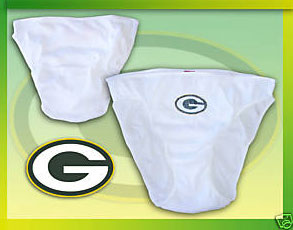 This item is deemed by the seller as “incredible.”  As if it is beyond human comprehension to imagine a pair of underwear emblazoned with the Packer emblem.  Perhaps we need some kind of supercomputer to put it into understandable terms for us. Incidentally, this particular pair is size “large,” – we actually just got word that all the “junior miss” sizes have been purchased by Mark Chmura.

(There’s a scene on Family Guy where Quagmire attempts to buy a pair of women’s underwear, but it cannot be repeated here.)

In other women’s undergarment news, this item also graces the pages of eBay: 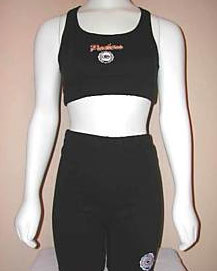 I should warn you – this item is a clever trick.  Everyone knows that no woman who leaves the house wearing any Packer-related clothing has ever exercised.  You’d be better off buying a giraffe a bowling ball. 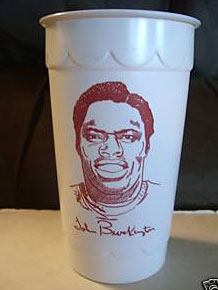 Someone just paid $39 for a fast food cup that’s been sitting in someone’s basement for 37 years.  Ironically, after his playing career ended in 1978, Brockington lost boatloads of money after investing in a Ponzi scheme that went belly up and after investing in a nutritional supplement company that was found to have caused several deaths.  So there was likely a point where you could have an ice milk actually served to you at Burger King by John Brockington.

Another Lombardi item – for the low, low price of $1700.00.  Someone once wrote that John F. Kennedy always paid for dinner with a check, knowing that the restaurant owner would never dare cash a check with his signature on it.  So he ate for free for years.  It’s likely Lombardi got the same treatment in Green Bay for the entirety of his tenure.

Strangely, if you look at the check closely enough, Lombardi used it to purchase a “Slap Chop.”

These signed jerseys are noteworthy only because of the accompanying photos on the ads: 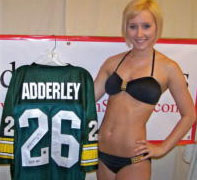 “You know, I was wavering back and forth on whether to pay $150 for a signed Willie Wood jersey, but then I saw the picture of the GIRL IN THE BIKINI HOLDING IT, and I thought to myself, ‘any jersey quality enough to be held by an almost naked girl at a trade show is definitely good enough for me.’” 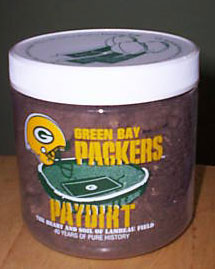 I know what you’re saying – how do we know that it’s actually “the soil that brought the Packers home six NFL titles,” as the ad suggests?  THERE’S A CERTIFICATE OF AUTHENTICITY, JACKASS!  In fact, if you don’t believe it comes with a certificate, I can make one and print it up right here on my computer.  Maybe that’ll keep you from shooting off your mouth, smart guy. 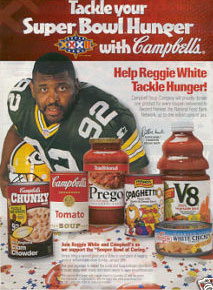 We all know the elusive Reggie White was hardly ever photographed, and virtually never stooped to selling products.  Which is why we should all thank eBay user “azusboy” for unearthing such a rare treasure – an actual photo of Reggie White in his Packer uniform selling Campbell’s soup from – I hope you’re sitting down – a newspaper insert from 1997.  As clearly indicated in the ad for this rarity, “These ads were printed on thin paper and inserted into Sunday newspapers. Because they were on such thin paper, they were fragile and easily damaged.”

You see, he has gone the extra mile and cared for this item much as the Library of Congress maintains the original copy of the U.S. Constitution.  A team of archivists likely cared for this document 24 hours a day for the past 12 years so it would find its way to your home in mint condition.  If you don’t purchase this newspaper insert, you might as well be urinating on this guy’s lawn for all the work he’s done for you.

Alright, enough.  You get the idea. 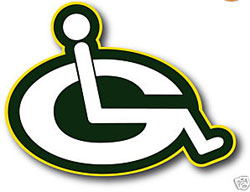 Finally, some ingenious Bears fans decided they would take the Packer logo and make it into… wait for it… A handicapped logo!

(I’ll give you a couple minutes to pick yourself off the floor and catch your breath from all the belly laughs you’re likely letting out.  Incidentally, the name of the company is “O-Chit,” which tells you we’re dealing with some real Mensa candidates here.)

Here’s a tip for Bears fans, considering what happened Sunday night – take one of these handicapped logos and send it to Brian Urlacher to put on his car.  I hear he’ll be needing it for the rest of the season.

Of course, there’s plenty more: eBay boasts over 240 pages of Packers-related items.  I didn’t even mention the $500 replica 1996 Super Bowl ring you can buy.  What could possibly be the reason you’d want one of these?  If you consider yourself to be a member of that team, then you’re a douche.  Otherwise, people will think you paid Eugene Robinson $100 for his ring so he could score some hookers and perhaps a Mike Holmgren on a Harley statue.

But the best parts of eBay, naturally, are the ridiculously hyperbolic headlines people give their products.  Take, for instance, your run-of-the-mill “We’ll Never Forget You Brent” t-shirts that seem to be all the rage these days.  This guy’s headline reads thusly:

“Now wait a minute – I wanted to get myself one of these ‘Brent Favre’ shirts, but I couldn’t decide which one.  But HOLD ON – this one is CLEARLY MARKED ‘FUNNY.’  I think I should probably go with that one over the thousands of other guys selling shirts that say the same damn thing.  I need to buy the FUNNY version.”

The other, more disturbing, trend is that easily 30% of the Favre memorabilia dealers on the internet continue to spell his name “FARVE.”  Honest to God, people – if you can’t spell his name after 17 years, you might as well give up. I know more than a decade ago, the state legislature had a big debate about the high school graduation test. I propose the following: Get everyone in a room, and ask them if they can spell “Favre.” If they can’t, they are clearly incapable of learning anything. We should then ship these people out to their own city where they can’t make the rest of us any dumber. (I believe Illinois has such a place, which they call “Joliet.”)

Between 1994 and their resurgence in 2004, there were some thin years for the band Green Day.  That’s why their 1998 video for “Nice Guys Finish Last,” which attempts to lampoon the old NFL Films videos, went virtually unseen.  But check it out – they’re obviously making the “Green Bay” – “Green Day” connection, with moderate results.  But it’s still kind of bizarre to see this popular band pay tribute to your team.

Obviously, nobody watches the NFL Network on Saturdays, since everyone’s watching college football.  So here’s my solid gold idea to get people to watch the network when the NFL isn’t on:

Take players from the same NFL team whose former college teams are playing each other that Saturday, put them in the same room, throw a camera on them, and let the magic happen.  You’re telling me you weren’t interested in the trash talk between Ryan Grant and Charles Woodson before the Notre Dame/Michigan game last week?  Think any sparks flew between Clay Matthews and A.J. Hawk before USC-Ohio State?  Watching them view the game together would be can’t-miss television.  Most of these guys are world class trash talkers – and the look of dejection when a player’s team goes down would be priceless.  This could be my favorite hypothetical show.

Finally, yesterday the Bubbler conducted a “Who am I?” contest in honor of former Wisconsin Badger and 8 year NFL Veteran Jerry Wunsch.  It reminded me of a story I believe I once heard Barry Alvarez tell that may or may not be true:

Before one of the Badgers’ games, Alvarez brought in the Reverend Jesse Jackson to talk to his team.  Jackson went on at length about his relationship with Dr. Martin Luther King, Jr. and his commitment to the civil rights movement.

When Jackson finished talking, he asked the team if anyone had any questions.  Wunsch raises his hand, and Jackson calls on him.  Wunsch asks, “what was it like to hit three home runs in a World Series game?”