Please remove your hats while my son gets this party started:

I was walking down the street some time ago, when I happened upon a little gray bird hanging out on the sidewalk.  Next to the bird was a giant bag of popcorn that someone had just thrown on the ground.  The bird was just standing there, looking amazed at his good fortune.  Here was a pile of free popcorn at least three times his height, and he probably didn’t really have to be anywhere for a while – so he was ready to dig in for a meal unmatched in his short life. 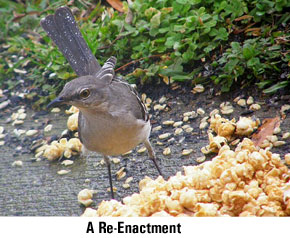 As I stood and watched him, I started to think: what would be the human equivalent to a bird finding a giant bag of popcorn?  It would have to be something so insanely terrific that you couldn’t even express yourself in any rational way.  Natalie Portman feeding you Krispy Kremes?  A horrific Zamboni accident involving Janeane Garofalo?

Then, it came to me.  Next Monday night could be my giant bag of popcorn.

If the Packers beat the Favre-led Vikings in the Metrodome, it will eclipse any non-Super Bowl Packer experience I’ve had.  (Until, of course, they play again in a few weeks.)  As I’ve been sitting at work all week, I feel like I’m baking in my own skin waiting for this game.  I can’t sleep.  Can’t eat.  Can’t conjugate Latin verbs.  (Although I couldn’t beforehand, so there’s that.)

The flip side of that, of course, is that if the Packers lose, it could easily mean the end of me.  I almost feel like I should be making funeral arrangements, just in case.  (Cause of death: “Exploding head.”)  I’m dangerously close to calling a friend of mine to tell him where I’ve hidden all my “adult” materials, just so nobody finds them all after I’m dead and realizes what a dirtbag I was.

(Side note: it seems strange to me that the words we use for looking at naked women always equate maturity with prurient desires. In fact, it’s the exact opposite. Think about it – movies targeted to “mature” audiences. Going to a “gentlemans’ club.” What is so mature or gentlemanly about stuffing dollar bills into a naked woman’s garter? In fact, I think it makes a lot more sense to consider those things “immature.” I understand a teenage boy looking at pictures of naked women a lot more than I can understand a grown man doing the same. Then, it just gets a little…creepy.)

Oh, and if my head does end up exploding, I just wanted to say… I have always loved you.  Not you, the other one over there.

Of course, the game is already partly rigged, due to a federal court in Minneapolis overturning a 4-game league-imposed suspension on the Vikings’ Williams Sisters, Kevin and Pat.  Without this homer court stepping in, these ‘roided up cheaters would be out for Monday night’s game.

I was at a concert on Saturday night, and while standing in the lobby, I overheard a comely young 23-ish old woman explain her Packer tailgating experience from the week before.  “I went to some team-sponsored tailgate,” she explained to her male friend., adding, “and I ended up dancing with all these old Packers.  Some guy named Furry or Fuzzy or something. They were all so cute.”

That got me to thinking – how easy would it be for old dudes all over Green Bay to pull this racket?  Just play they “I’m an old Packer from the ‘60s” card, and you’re totally in with the ladies – whether you actually played or not.  There are really only two steps to this strategy:

1. Give yourself a fake colorful nickname from back in the day.  Just say all the other players called you “Stinky Nuts Nelson” or something – sounds realistic enough, right?
2. Make up some fake crazy story about how you and Paul Hornung snuck into the Green Bay Zoo one night and tried to teach the giraffes how to play poker.  Hornung was so sauced all the time, he not only won’t remember the story, he’ll probably actually believe he played with you.

All you really have to do is be old and walk with a limp, and you can score some nice young hotties.  But even if that fails, you can always go down to the local tavern and do the Lambeau Leap into the trousers of some chain-smoking handbag.

(Side note: you may laugh, but remember, this is the state that almost elected a woman to statewide office solely because she claims she had sex with a bunch of Packers.)

(Double-secret side note: I always laugh at people that go to rock concerts wearing ear plugs.  You know these people don’t have wives and kids, because they’d actually prefer to be deaf.  But doesn’t this kind of cancel out the whole idea of going to a concert?  Isn’t this somewhat like going to a Bucks game wearing a blindfold?  Actually, come to think of it, that may be the best way to watch the Bucks this year anyway.)

I have a standing rule that I don’t want to hear anything about anyone else’s crappy fantasy football league team.  But last week, I sunk to 0-3 in my league – a league in which five of the owners are women, one team has three tight ends, and three teams have two kickers.  I blame this anomaly completely on the execrable scoring system, in which running backs and receivers only get a point for every 25 rushing or receiving yards – so basically, unless you get lucky and your team scores a lot of touchdowns, you’re out of luck.

For instance, I had Steven Jackson rush for 117 yards last week, and only get 4 points for it – yet my kicker, Jeff Reed, scored 8 points on 2 field goals and 2 extra points.  So you tell me – which is more valuable? (I have no idea whether this would have helped me win any of my games, but I am 100% certain it helps me feel better to bitch about it.)

I’ve been meaning to talk to our commissioner about some of the other rules, too.  For instance, you get:

One of the main reasons I’m excited about watching the game on Monday night is seeing if Johnny Jolly can pick off another pass.  (I think the one he had against the Rams was technically a fumble recovery, but whatever.)  Seriously, the guy has the best hands on the team – they should split him out at wide receiver.  We’ll see if he can break the Packer record for interceptions by a lineman, currently held by Stinky Nuts Nelson, the season before he was trampled to death by a giraffe that caught a bad river card.

I was alerted by a friend to a little known rule in sports: apparently, they actually continue to play baseball games while the football season has started.  I know, I looked it up on the internet.  It’s true.

The funny thing is, remember early in the season, when only a handful of Brewers games were in high definition?  Obviously, they were stacking all the HD games to the end of the year, when presumably all the Brewers’ games would be tense, playoff-level clashes.  So how’s that working out now?

Finally, I’d like to welcome the SportsBlonde to the ‘Bubbler.  Notice how they haven’t asked me to be on any live video feeds.  She does one blog post, and she’s off talking to Andrew Bogut. (Admittedly, I couldn’t do it, because I don’t speak Australian.)  Then again, if someone saw me on camera, they’d think they accidentally stumbled onto an online meatball eating contest.

So in honor of the new contributors, I wrote this entire post while wearing a bikini.  Seems to be the new uniform around here.