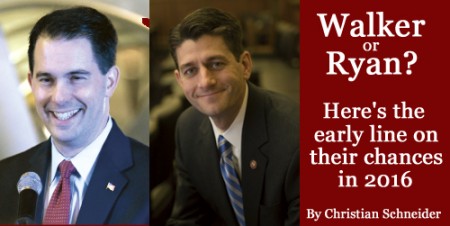 Every now and then, two major talents emerge in close proximity. In 2011, Ryan Braun and Prince Fielder of the Milwaukee Brewers finished first and third, respectively, in the National League’s Most Valuable Player voting. Twelve times, two actors (including, in one case, three) from the same movie have been nominated for Oscars for Best Actor. (The most recent was 1984, when F. Murray Abraham and Tom Hulce were both nominated for “Amadeus.” Abraham won.)

In politics, Wisconsin is experiencing such an embarrassment of talent. Virtually every other part of the country is honored to have one elected official with the chops to be considered presidential material. Yet in the Dairy State, the only debate is over which of its two top Republican stars would make a better commander in chief.

So who has the better chance? Gov. Scott Walker or Congressman Paul Ryan?

Walker and Ryan grew up within a car drive of one another. Ryan lived in Janesville, while Walker was raised 20 miles away in Delavan. Each considers Ronald Reagan a key figure in his political development. And both dominated national news in 2012 on their way to becoming national GOP stars.

Ryan, of course, had his taste of a presidential run, having served as Mitt Romney’s capable vice presidential sidekick. While the party faithful initially worried about how Ryan’s aggressive plans to scale back Medicare and Social Security would play with voters, it appears that Ryan may have been a net boost to the Romney campaign. While Romney lost the election by a wide margin of electoral votes, his slim margins of defeat in key states like Ohio, Virginia and Florida show those states ended up being closer than the polls indicated before the Ryan pick. He most certainly didn’t harm his status with the party faithful, who now know Ryan can stand up to the pressures of a nationwide campaign.

Yet with congressional Republicans faring so poorly nationwide, many party faithful think it is time to look for a governor like Walker. He’s taken his licks and won a recall election by a larger margin than he won his first gubernatorial contest; his toughness is appealing to a party that currently lacks it.

Of the two, Ryan is the better public speaker. His 14 years in Congress have honed his skills; he can speak knowledgeably and extemporaneously, no matter how arcane the topic. Walker has improved as a speaker, but he is cautious and more reserved than Ryan. His appeal is immense with Republicans, but he still makes progressives scream at their televisions.

Walker has history on his side. The only president elected directly from the House to the presidency was James Garfield in 1880 — a singular event that solidified Garfield’s status as either the best campaigner or worst president of all time, depending on one’s perspective. Governors, on the other hand, routinely ascend to the presidency, as voters appear to see their executive experience on the state level as a plausible dry run.

Of the two, Walker also appears to be the more ambitious. Following the November election, Walker went on an aggressive speaking tour around the country and has coyly avoided ruling out a run in 2016 (assuming he is re-elected in 2014).

Conversely, despite being a key player in the “fiscal cliff” negotiations, Ryan has disappeared from the public eye and has uniformly downplayed his desire for higher office. He genuinely seems to enjoy policy over politics.

For Wisconsin Republicans, it is an impossible choice. Eventually, it may be up to the other 49 states to decide for them.