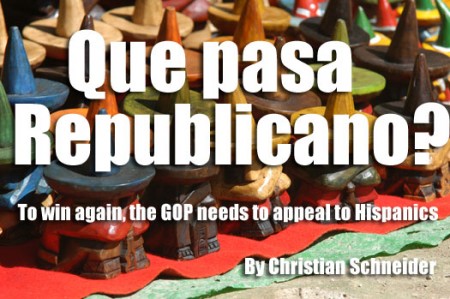 Following the 2012 presidential election, pundits of all stripes began appealing to retroactive prescience to explain what cost Mitt Romney the presidency. Whatever their pet issue, it suddenly became the reason Romney blew it — the Republican “war on women,” climate change denial, etc. Members of the Star Wars fan club thought Romneygot hammered because he didn’t take up the cause of Ewok independence.

But the most cited reason for Republican failure was the fact that Hispanic voters continue to drift away from the GOP. According to exit polls, Mitt Romney received 27 percent of the Latino vote, down from the 31 percent John McCain received in 2008 and down even farther from the 44.1 percent George W. Bush garnered in 2004.

In recent years, Republicans have tried to appeal to Latinos by stressing the similarities of their core beliefs: Hispanics are industrious and family-oriented, and their religious convictions make them a natural constituency for the GOP.

Earlier this year, I sat down with Gov. Scott Walker, and he explained that if Republicans stuck to a message of freedom and lower taxes, Hispanics would become allies. “The vast majority of Latino voters I know in Milwaukee County and statewide are very much driven by the small-business, entrepreneurial, hard-work mindset, and they really don’t want the government in their way.”

“I try not to ‘silo’ voters. I try to listen to what their concerns are,” he said. “I’ve actually spent a lot of time with the Hispanic Chamber of Commerce and… I realized that their members care about barriers to growth in small business — excessive regulations, excessive litigation, property taxes are too high, the sorts of things that I talk to everyone about. So I don’t say, ‘Here, my Latino message is going to be different than my message anywhere else out there,’ and I think voters appreciate that.”

But as Hispanics continue to jump ship, Republican campaigns become less about persuasion and more about simple math. There just aren’t enough white voters to maintain the GOP’s slim margins of victory in swing districts.

Still, as Walker’s statements indicate, it is simply not in the Republican DNA to start slicing up voters by race. Democrats are the ones who see voters in groups and tailor their message accordingly. Republicans see voters as individuals and expect their messages of liberty and self-sufficiency to have broad appeal. For Republicans, appealing to minority voters is like speaking a second language.

But it is something they have to do.

There is a small, fairly well-reasoned contingent of conservatives who would support modifying the Republican hardline stance on immigration. Despite the left’s dismissal of George W. Bush as a right-wing ideologue, he proposed the “guest worker” plan in 2004, accurately recognizing, I think, that we’re not just going to pack up 12 million illegals and ship them home. That plan was burned to the ground by his own party.

Republicans would be wise to follow the Jack Kemp “bleeding-heart conservative” blueprint. Kemp and his Empower America cohort Bill Bennett were outspoken proponents of immigration, calling immigrants “a blessing, not a curse.” In 1994, Kemp and Bennett opposed California ballot Proposition 187, a measure to bar illegal immigrants from obtaining public services.

Some Republicans think putting a Hispanic conservative on the ballot will bring Latinos home — as if Marco Rubio alone is the answer. But the record shows that Hispanics will vote against other Hispanics if they don’t reflect the interests of the group as a whole.

For Republicans, a lot is at stake: Without Hispanics, they may become a permanent minority themselves.