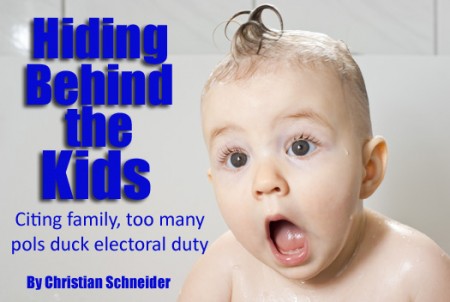 Last August, Congressman Paul Ryan announced for the 43rd time that he would not run for president. He’s always maintained that the ages of his children — three kids between the ages of 6 and 9 — are a factor in his decision. His standard line? “My head isn’t big enough, and my kids are too small.”

Indiana Gov. Mitch Daniels begged off, saying he didn’t want to subject his family to the scrutiny of a presidential campaign. “In the end, I was able to resolve every competing consideration,” he said, except for the most important consideration of all — “the interests and wishes of my family.” And when irascible New Jersey Gov. Chris Christie bowed out of the race, he deemed it a “family decision.”

All of these family considerations have left Republican presidential voters with a choice of C-list emetics for candidates. Mitt Romney is a Republican when he deems it necessary to win Republican elections. Herman Cain, Michele Bachmann, Jon Huntsman and Rick Perry all flamed out before the primaries were even held. Newt Gingrich is so toxic, he should wear a Mr. Yuk sticker on his lapel. (Poor Mitch Daniels: He hesitated to run because his wife once left him and returned to remarry him. Yet GOP voters warmed up to Gingrich, who changes wives more often than he flosses.)

And while “do it for the kids” is an aphorism in politics, more and more politicians are deciding not to do it for the kids. They want to protect their children from the Palin-ization of presidential politics, where every offspring’s missteps could translate into blogging frenzy.

But exactly how many of these kids are pleading with their parents to eschew a run for president? Think any politician’s 10-year-old-son wouldn’t love to say, “Hey, Dad, I’m having trouble with my footwork — can you call Peyton Manning and have him come over and show me the three-step drop?” You think “My dad is president” might be a good icebreaker with the ladies at high school parties?

The whole “I want to spend more time with my family” excuse is worn out and meaningless. Ambitious men have always run for office to get away from their families — generally, they only rediscover their progeny when it seems like they can’t win again. But that’s the beauty of being president — you get to take your whole family with you and live in the same house.

Furthermore, blaming the family when you decide not to run is a bit unseemly. Suddenly, your kids become impediments to the realization of America’s greatness. Suppose you spend all your time talking about how America is going to implode without changes to its entitlement programs — and then decide not to change those programs because you might miss some T-ball games?

How does that sound to military families, who have to do without fathers and mothers for extended periods of time (and sometimes forever) to preserve the American idea?

Sasha and Malia. The Bush daughters. Chelsea Clinton. All of us would be proud to have children as happy and well-adjusted as these kids — and every one has lived through the apparent horrors of growing up in the coolest house in America. We know politicians love their kids — but so do hundreds of millions of other American families that are looking for visionary and inspiring presidential candidates. We’ll chip in for baby-sitting, we promise.