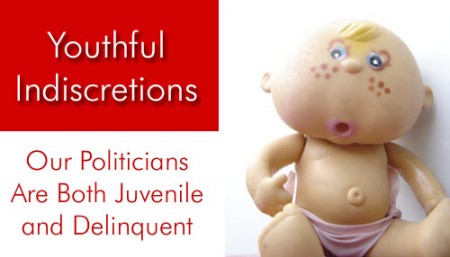 The ubiquitous television commercial plays nonstop, making it the aural wallpaper of our lives: Bob Dylan’s “Forever Young” remixed over modern beats, reminds us that the fountain of youth can be found in a sweet carbonated beverage.

It’s not the first marketing campaign to promise us eternal youth, and it won’t be the last. In fact, as we get older, commercials sell us on being even younger-in 10 years, Pepsi is probably going to promise me I can enjoy life once again as a fetus.

But these marketing campaigns bring up an interesting question that filters beyond culture, into the way we’re governed: Is the world really short on people who are acting too grown-up?

When I was a kid, it used to be that we were always in a rush to grow up. Someone’s older brother always had an awesome new R.E.M. tape that gave us a window into what college life was like-and we’d do anything to get a piece of it. At age 16, my friends and I sneaked into a Washington, D.C., bar, and I sat stunned, enjoying poetry readings next to a guy with a beard.

Today, our feelings on age seem to be the exact opposite. People my age are now obsessed with youth culture. Grown men measure their cultural status based on whether they’re beating 16-year-olds in online Xbox games. Women in their 30s and 40s giggle about the Jonas Brothers and seek refuge from real life in tales written for teenage girls about nubile young vampires.

Ask any woman, and she’ll tell you she’d rather be Megan Fox than Margaret Thatcher. (Although in college, I found out you can quickly turn the latter into the former with a bottle of Bacardi and a light switch.)

Our government leaders have caught on to the juvenalization of the American public. If there are any two personality traits that characterize young people, it is their avarice and their inability to think long term. And there is no better way to describe today’s elected leaders.

Politicians on the national level promise us universal health care while ignoring how they’re going to pay for it. They run up trillions of dollars of debt, selling our future to China. They spend billions of dollars on farcical economic “stimulus” efforts that seem to only benefit political cronies, while America continues to hemorrhage jobs. As if children on a playground, they hurl puerile epithets like “racist” and “teabagger” to impugn their ideological opponents.

Wisconsin’s leaders on the state level aren’t any better. Despite being required to pass a balanced budget, the state currently faces a $2.7 billion deficit. Wisconsin’s governor and Legislature simply can’t resist the urge to buy more government than it can pay for. This isn’t at all unlike what would happen if I let my 6-year-old daughter loose in Toys R’ Us with a credit card.

All of this, of course, reflects a society that doesn’t mind being lectured on the environment by the likes of Leonardo DiCaprio. Or having Jessica Alba tell them who to vote for in a presidential election. Or being told not to wear fur by Pamela Anderson.

I, for one, have come to grips with getting older. I wouldn’t trade the life experiences I’ve had, people I’ve met, books I’ve read, food I’ve tasted, for anything. Sure, I could do without my belly button sagging sadly over my belt, and I’d prefer it if my nose hair didn’t look like two hamsters were having a boxing match in my nostrils.

But with age comes experience, and I’m hopeful I’ve translated what I’ve learned into being a more responsible adult.

This is a lesson our political leaders need to take to heart. As Flannery O’Connor implored, we need to start “pushing as hard as the age that pushes against you.” On both the national and state level, we need adult supervision. The issues of our day will remain intractable until the people we choose to represent us just…grow up.

Not All Democrats Are Hi-Fiving Today