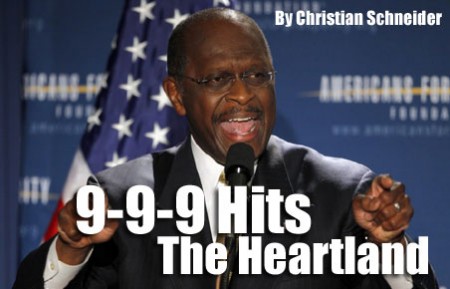 Virtually every one of the 150 hands in Wisconsin Congressman Paul Ryan’s Thursday town hall meeting shot into the air.

All day, Ryan had been peppered with questions about Republican presidential candidate Herman Cain’s economic plan, which replaces the current federal tax structure with a 9 percent personal-income tax, a 9 percent corporate-income tax, and a 9 percent federal sales tax. Milwaukee radio talk show host Charlie Sykes began the questioning in the morning. Ryan, the House Budget Committee chairman, answered another gauntlet of questions about 9-9-9 in a morning town hall meeting in Muskego. And now the residents of Oak Creek wanted to see if the plan had earned the imprimatur of Congress’ premier fiscal wonk.

Ironically, it was Ryan himself who took to the road last April to promote his own budget plan, which had recently passed through the House of Representatives. All across America, members of Congress were challenged on the details of Ryan’s budget at their town hall meetings. And many had trouble navigating their avalanche of charts and graphs with Ryan’s legendary alacrity. Now, he was being forced to explain someone else’s plan in the same way others had to defend his House budget in April.

Critics of 9-9-9 believe the plan’s regressivity render it dead in the water. (Cain addresses this problem in part by offering tax rebates to low income individuals.) They say the plan constitutes a large tax break for the rich, that it won’t raise the revenue it promises, and that it creates new taxes that Congress could more easily raise in the near future.

Yet Cain’s plan is an overwhelming victory in terms of marketing. Stunningly, in mere weeks, it appears Cain’s plan has saturated Ryan’s constituency. 9-9-9 has clearly piqued the interest of both conservative voters and enthusiasts of saying the same number three times in succession. (It is unclear as to whether former NBA star Moses Malone, who in 1983 boasted that the 76ers would sweep through the playoffs “fo, fo, fo,” is serving as Cain’s chief economic adviser.)

Ryan’s association with 9-9-9 began last week, when a headline in the Daily Caller breathlessly declared that “Paul Ryan ‘loves’ the idea of Herman Cain’s tax plan.” Ryan says the article didn’t get his position on Cain’s plan exactly right – while he “loves” the idea of candidates putting bold plans on the table, he wouldn’t sign on to all the details of 9-9-9. Specifically, he disagrees with layering a nine percent sales tax on top of a nine percent income tax, as many governments in Europe do.

When asked whether he thinks Cain’s numbers add up, Ryan says that while the plan hasn’t been officially “scored,” he believes it more or less raises enough money. “As someone who has been criticized for putting out a bold plan, I can understand what it’s like,” Ryan told me in between town hall meetings, adding that picking apart Cain’s plan was the job of the other presidential primary candidates, not his.

While 9-9-9 may have helped Cain surge to legitimacy in the GOP presidential primary, it also may be the only thing keeping his campaign afloat. Recently he has had trouble articulating his “phone a friend” foreign policy, in which he simply promises to be briefed often by really smart people. On CNN, he struggled to answer a fairly standard question from interviewer Piers Morgan on abortion, saying it was “not the government’s role, or anybody’s role to make that decision.” (He has since issued a statement saying his is “100% pro-life.”)

Meanwhile, members of Congress that spread throughout the country to talk about their accomplishments are likely to find that the star of their town halls is someone who isn’t even there. He is a frontrunning presidential candidate who, when a number of one poll’s respondents were asked to describe him in one word, used the word “pizza.” (Not since Herbert Hoover promised “a fourteen inch sausage-mushroom-and-onion in every pot” has the pizza rating been so high for a candidate.)

Other candidates are slated to roll out their economic plans over the next few weeks. But few will get the traction that Herman Cain has garnered through showmanship alone. It will be seen as to whether he can cash this goodwill into votes.

Manhood in a Bottle

Mark Pocan’s Smoke Screen: His pieties about protecting middle class families are a cover for hiking taxes on the poor