Memo to America: Wisconsin’s in Charge 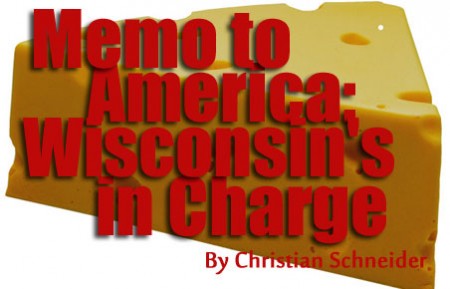 As you watched the Packers’ Aaron Rodgers put the Atlanta Falcons back on the bus this weekend, you may have said to yourself “isn’t Green Bay in Wisconsin?” Then, the more politically astute may have said, “isn’t newly minted RNC chair Reince Priebus from Wisconsin?”

After another malty beverage and another Rodgers touchdown, the politically deranged may have said, “isn’t new House Budget Committee Chair Paul Ryan from Wisconsin?”

And after Rodgers’ third touchdown, those of you named “Michael Barone” might have thought to yourself, “isn’t Wisconsin the only state to have flipped both houses of the legislature, the governor’s office, a U.S. Senate seat and two House seats to red?”

At that point, you might have said to yourself (hopefully you’re not saying this all out loud) “What exactly is this ‘Wisconsin’ I keep hearing so much about?”

I checked Wikipedia, and this is what I came up with:

“Wisconsin” is a state in the Midwest, rumored to be between Michigan and Minnesota. When a movie screenplay writer makes a character from Wisconsin, it is intended to signal that the character had a solid Midwestern upbringing. (Even homicidal oil baron Daniel Plainview hailed from Fond du Lac before he started drinking other peoples’ milkshakes.)

Wisconsin has given birth to national figures of vastly disparate political views. (The only things on which all residents agree is that Illinois sucks and God probably plays poker with Vince Lombardi.) It is a state where the fathers of noted liberal Senator Russ Feingold and noted conservative Congressman Paul Ryan once shared the same law office building in Janesville. It is the home of “Fighting Bob” LaFollette and Joseph McCarthy. William Rehnquist and Gaylord Nelson. Chris Farley and Heather Graham. Joanie and Chachi.

During the reign of Governor Tommy Thompson, Wisconsin was on the cutting edge of conservative government reforms. It has been a national leader in welfare reform, and has the nation’s oldest functioning private school choice program. Yet Wisconsin is also the first state to begin collecting an income tax (in 1911), and became the first state to allow collective bargaining for public employees in 1959. It has the distinction of being the birthplace of both the Republican Party and AFSCME.

It is a state where you’re more likely to get action on a first date if you take a girl bowling than if you take her to a fancy dinner. It’s a state where it’s so cold, you can’t leave the house for three months out of the year – and if you do, it’s to drill a hole in the ice and sit immobile for days while you try to catch fish (or until you run out of beer.) The state capital of Madison has a statue of former Wisconsin football coach Barry Alvarez (author of four Rose Bowl trips) but not of its namesake (author of the U.S. Bill of Rights.)

Recently, United Nations inspectors discovered the presence of “fried cheese curds” in Wisconsin, which the state had previously fought to keep top secret. Unleashing this delicacy on the nation would trigger an arterial armaggedon, likely trimming the U.S. population by 37% within one year. (Merely saying the words “fried cheese curds” out loud has been known to cause heart murmurs.)

Wisconsin’s most recent heyday occurred in the late 1970s and early 1980s, when its sports teams ruled the national landscape and its breweries cranked out enough beer to inebriate the nation. (If you’re an ugly American male who ended up smooching on a girl out of your league between 1930 and 1985… Milwaukee says, “you’re welcome.”)

Yet in the past decade, the state has fallen on hard times. Breweries have closed and jobs have fled Milwaukee as if the city was the kid in school with head lice. Politicians looked on with disinterest (or from prison) as the city’s education system decayed badly. (Meanwhile, the Milwaukee teachers’ union put their finger on the reason for the spike in illiteracy – the fact that their health plan didn’t cover Viagra.)

Overseeing this debacle was Democratic Governor Jim Doyle, whose greatest accomplishment in eight years of office was once completing a sudoku puzzle entirely in pen.

Yet with the election of 2010, Wisconsin has assumed its place on the front burner of conservative politics. New Governor Scott Walker has already been prominently featured in the New York Times for his willingness to challenge public employee unions over their generous benefit packages. Priebus will be a leading figure in the 2012 presidential elections, which Weekly Standard editor Bill Kristol and others are urging fiscal dreamboat Paul Ryan to enter. On his way to to Congress, former “Real World” star Sean Duffy managed to get an astounding 100% of the vote from 38-year old women. These are definitely good days to be a Cheesehead. So don’t worry, America – we’re taking the wheel. All we ask is that you cheer for the Packers.

(And if you don’t, we’re unleashing the weapons-grade cheese curds.)