People Do Stupid Things: That’s why political movements should be anchored in ideas 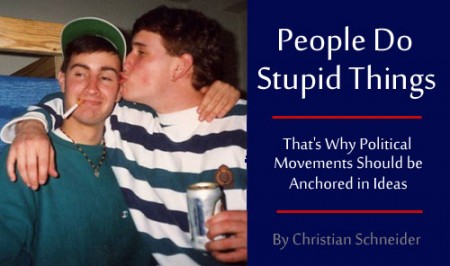 In the July issue of WI Magazine, I got the chance to write about the current “Conscience of Conservatism,” Congressman Paul Ryan. (A quick aside: Now would be a good time to start the “Paul Ryan Drinking Game.” Any time this magazine mentions Ryan, take a drink. You’ll be dialing up former lovers by the third page.)

During our discussion about his growing fame, Ryan said something that I immediately dismissed as false modesty: “It’s not about me, or my name, it’s about the ideas that I’m pushing.”

Like Frank Lloyd Wright, I prefer honest arrogance to fake humility. But in reviewing the past election season, I think Ryan has a point.

People do stupid things. We drill holes in our bodies. We tattoo the names of our favorite bands on our bodies. We listen to modern country music. We smoke. We have children with people to whom we are not married. We grow comb-overs.

And too often, politics is about people and not ideas. Flawed, misinformed, vulgar people.

Take, for example, poor Christine O’Donnell, the defeated Republican candidate for U.S. Senate in Delaware. Had O’Donnell beaten the odds and earned election to the Senate, she would have likely been a dependable conservative — something voters in record numbers all over the country said they wanted.

But in the public’s perception, O’Donnell the oddball swallowed O’Donnell the conservative. She famously dabbled in the occult in high school, leading to the most memorable ad of the 2010 election cycle, in which she declared: “I’m not a witch.”

Erstwhile South Carolina Gov. Mark Sanford’s principled anti-federal stimulus stand was forgotten when the voters learned he was being stimulated by an Argentine mistress.

Hanging the future of a political party on star power rather than ideological principles is always a risk. For one, candidates elected on the sheer force of their personality often stray from the parties that elected them. (See Schwarzenegger, Arnold.)

If ideas ran the show, Republicans wouldn’t have to cringe when Sarah Palin’s family life turns into a “Green Acres” episode. Democrats wouldn’t have to slap their heads in abasement when John Edwards is found to have fathered all of the Jonas Brothers.

And when politics becomes about ideas and not personalities, the discussion suddenly ramps up to a new level. Take, for example, the much-talked-about documentary Waiting for Superman. Written and directed by Davis Guggenheim (who directed Al Gore’s An Inconvenient Truth), the movie details how the American education system is destroying opportunity for inner-city youth.

Think tanks like this magazine’s publisher, the Wisconsin Policy Research Institute, have been soberly urging such reforms for decades. Yet once the Inconvenient Truth director waded into the morass, traditional Democrats sat up and began to ask hard questions about teachers unions. Suddenly, it’s not who is saying it, but what is being said that takes precedence.

A little Hollywood can be a good thing.

Certainly, it’s Pollyannaish to believe the day is coming when every voter carefully reads candidate policy pronouncements as if they are mutual fund prospectuses. Politics has drifted into the realm of entertainment and will likely stay there.

One suspects that Sen.-elect Rand Paul’s devotion to the “Aqua Buddha” occupies the same lobe in the national cranium as Lindsay Lohan’s inability to wear underwear in public.

But Paul Ryan is showing that pushing ideas for a politician doesn’t have to be a death sentence. In fact, it can help get government back where it belongs — in the news section.

The Story of Business: Competing For a Future