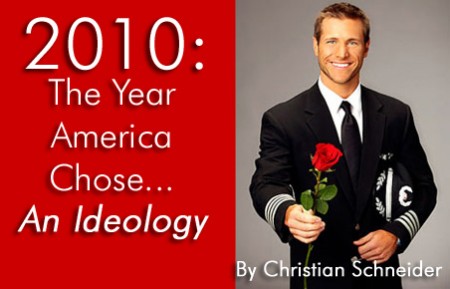 By 10:00 PM on the night of November 7, 2006, every drop of blood had run from my head. A sickly pallor had fallen over me. The look of shock on my face resembled one of the teenage boys in “Sixteen Candles” who had just gotten a first look at Molly Ringwald’s underwear.

During the 2006 election cycle, I served as a lead staffer for the Committee to Elect a Republican Senate (CERS.) We were charged, obviously, with retaining the 18-15 Republican advantage in the Wisconsin State Senate – and, until the results came pouring in from all over the state, fully expected to do so.

But election night was a bloodbath. Republicans all over the state were being violently cast from office. It was as if the entire state had just come home to find the Republican Party in bed with its wife.

All of our preliminary polling said GOP candidates would be just fine. The public wildly supported many of the initiatives our candidates were pitching – spending more money in classrooms and less on bureaucracy; eliminating income taxes on Social Security income; freezing property taxes. Our head-to-head polls showed us ahead in each of our close races.*

But in losing four previously-Republican seats, it became clear that they were caught up in a national tidal wave – one that swept the GOP out of office in the U.S. House and Senate. (At least that’s what I tell myself in order to sleep soundly. As Mark Twain said, “no one is willing to acknowledge a fault in himself when a more agreeable motive can be found for the estrangement of his acquaintances.”)

In retrospect, it appears that there really wasn’t anything local Republicans could have done. By 2006, the American public was tired of seeing daily reports of American casualties in Iraq. The one GOP legislative achievement of note was expanding Medicare prescription drug coverage, a plan that even senior citizens met with a collective “meh.” By election time in 2006, George W. Bush’s approval rating was slightly below “slamming your head repeatedly in a car door.”

In 2010, polls strongly suggest that Democrats are facing the same national tidal wave. In many cases, incumbent Democrats may just have to board up their windows and hope for the best.

But there is one fundamental difference between the previous two election cycles, in which Democrats swept the nation, and the election of 2010. In 2006 and 2008, voters rejected a person; in 2010, they are poised to reject an ideology.

Just think – in 2006, it was the war. In 2008, it was the economy. In both cases, George W. Bush was at the helm. Bush’s unpopularity made John Edwards look like “Sully” Sullenberger by comparison.

(Ironically, it can be argued Bush was elected based on President Clinton’s priapic misadventures, not necessarily on any ideological basis.)

But in both the 2006 and 2008 elections, voters weren’t reacting to phenomena that were necessarily “conservative.” There was nothing inherently “conservative” about the War in Iraq – it was simply a noble war fought execrably in its pre-surge years. It was completely untethered to the fundamental principles of smaller government, individual liberty, and free markets. (If anything, the GOP strayed so far from those principles, they rendered themselves indistinguishable from Democrats.)

And such was the case with the 2008 election, where Republicans were actually humming along comfortably until the economy collapsed. Again, while many people retroactively blame Bush for the collapse, nobody can really name a single thing Bush actually did to send the economy into a tailspin. He just happened to be President when the nation’s largest banks decided it was a good bet to push all their chips into the middle of the mortgage table while holding a two-six off-suit.

On the other hand, 2010 is a direct rejection of the incumbent ideology. Voters are going to punish liberal politicians for carrying through on what they actually believe.

Voters are tired of paying higher taxes for lower quality government. They’re fed up with the underhanded way in which policy is made by buying votes with pork projects.
They strongly reject the notion that government has the wherewithal to manage their health care. (In a Rasmussen poll out this week, 61% of Americans believe ObamaCare should be repealed.) Voters recognize that putting government in charge of making something cheaper is a little like putting Roger Clemens in charge of baseball’s steroid policy.

Someday, Republicans are going to re-take the presidency and perhaps even both houses of Congress. They will then forget the conservative stances they took to regain the voters’ trust and be cast aside once again in favor of a liberal politician promising “change.”

And when that happens, you will find me at the same place I was in November of 2006. On a barstool, attempting to explain what went wrong to the congregation of empty Heineken bottles in front of me.

You, Too, Can Be a State Government Employee