Consider the Humble Candidates: Who cares if they grew up eating dirt sandwiches? 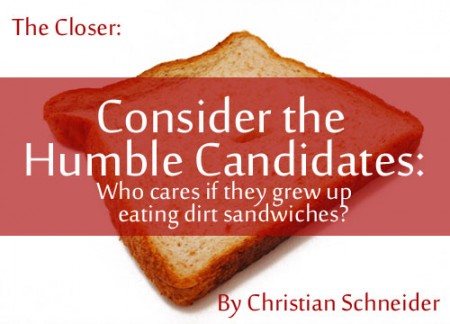 In an online ad, Republican congressional candidate Dan Kapanke wants you to know he’s a real guy. “Having been born and raised on a dairy farm, I have a pretty good idea of what Wisconsin people value,” says Democrat Ron Kind’s challenger for the 3rd District seat.

While it’s a nice sentiment, it’s meaningless. Growing up on a dairy farm doesn’t teach anyone anything I value. It teaches a person to milk cows and shovel manure.

This is perhaps the most annoying aspect of campaign commercials by candidates of both parties — the “I’m from humble beginnings” talking point.

Of course, the second most annoying campaign commercial stunt is the “candidate walking through a factory wearing goggles and a hard hat” shot. It’s meant to convey the candidate’s connection to the hard-working commoner — as if the only jobs that really mean anything are jobs in factories.

But you know what a really hard job is? Being a stripper. Just once, I’d like to see a Russ Feingold for Senate commercial where an adult dancer on a pole works out her frustration with the bad economy to Mötley Crüe’s “Kickstart My Heart,” while Feingold stands nearby, looking concerned (and wearing a hard hat and goggles, of course).

Even more ridiculous than the “I feel the pain of the working man” candidates are the ones who pretend they grew up poor. You know, their parents took them to McDonald’s, and all they could order was a large napkin and a small straw.

Now it’s true that there are things to be admired in coming from humble beginnings. It teaches some people to value simple pleasures, and it gives them a sense of what manual labor is really like.

But let’s face it, among people who grow up in trailer parks, the number who end up taking paternity tests on the “Maury Povich Show” outstrips congressmen by about 1.2 million to one. Yet voters seem to associate growing up poor as evidence of character and accomplishment.

I, for one, don’t really care about a candidate’s life story. I care what’s in his or her future. If a rich kid goes to really great schools, takes advantage of learning from the best teachers, and emerges a bright and energetic adult, that’s a thing to be admired.

Yet you never see a campaign ad that begins with the words, “I overcame growing up rich….”

Should we discount Congresswoman Tammy Baldwin because she was raised in a well-educated household with two UW-Madison faculty grandparents? Should we think any less of Congressman Jim Sensenbrenner because his great-grandfather founded Kimberly-Clark? Is Sen. Russ Feingold any less electable because his father was a big-shot attorney?

Of course, the answer is no. In fact, the inverse is true, as well. When I drive by a house with a car up on blocks in the front yard, it doesn’t compel me to walk up to the guy in the wife-beater t-shirt on the front porch, hand him my wallet, and trust him to spend my money wisely.

Here’s a message to candidates: We don’t care if you grew up eating dirt sandwiches. We do, however, care if you understand economics, foreign policy and the limits of do-goodism.

If all else fails, candidates should consider the fearsome lesson of John Edwards, whose treacly claim of moral and political goodness because he grew up poor as “the son of a mill worker” was not exactly convincing.

The millionaire trial attorney proved himself to be a world-class scumbag when he fathered a child out of wedlock while his wife, Elizabeth, was battling breast cancer.

Maybe someday his fatherless two-year-old daughter can use her story of overcoming adversity to run for Congress herself. Or she could end up in a Russ Feingold stripper commercial. Let’s hope she chooses the more admirable career path — and decides to strap on the heels and work the pole.

Rebel Without a Pause: Behind the Scenes With Paul Ryan