Welcome to the Federal Department of Wisconsin

Whether they’re conservative or liberal, Wisconsinites can all agree on one thing:  We LOVE being from Wisconsin.  We love playing cardiac Russian roulette by gorging on cheese curds.  Nobody bats an eye when someone wants to be buried in a Packer jersey.  And we’re proud of the fact that the sub-zero weather gives us thick skins and warm hearts.

In fact, when our nation’s founders wrote the U.S. Constitution, this sense of regional pride may have been what they had in mind.  Our federalist system rewards state sovereignty, making each state what U.S. Supreme Court Justice Louis Brandeis dubbed a “laboratory of democracy.”  If we think (or know, as the case may be) Illinois is a cesspool, we don’t have to live under their laws.  Better yet, now that we’re done renting their quarterback, we can go back to pretending Mississippi doesn’t exist.

However, over the years, state sovereignty has begun to erode as the federal government grows in scope and reach.  Each Congress births more federal programs for the states to implement, and more mandates for them to obey.  And at an alarming rate, Wisconsin has been drunk-dialing Congress at 3 AM, begging for more federal aid to keep the state’s programs alive.

Until this year, Wisconsin’s loss of independent governing authority has been a slow process.  But the creeping hand of the federal government has grown steadily for a quarter century.  Between 1984 and 2009, federal funds as a percentage of the Wisconsin budget grew from 18% to 25%. However, this year, the floodgates have been opened.

Governor Doyle’s proposed 2009-11 budget, on the strength of a $4.5 billion increase in federal funds, increases the federal share of the state budget from 25%to 30% in one year.  Commensurately, state general purpose revenue (GPR) drops from 50% of state spending to 45%.  In many cases, such as school aids, Doyle merely plugs federal money in where state general fund revenue had previously been used: 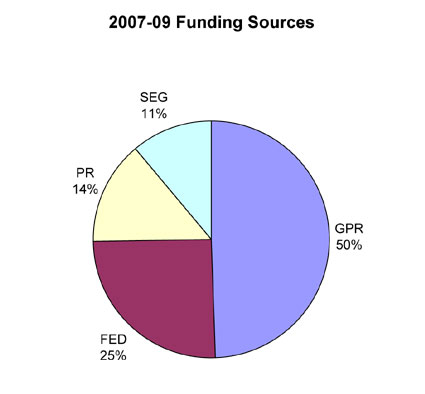 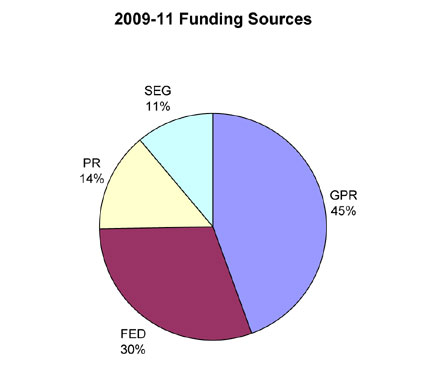 The skyrocketing use of federal funds to run our state’s budget is troubling on several fronts.  If the feds turn the “stimulus” spigot off after this biennium, Wisconsin is on the hook for billions of dollars that will likely be raised via tax increase.  Conversely, if Congress keeps pumping money into our state budget to prop up our spending, we will have ceased to be our own sovereign entity.  We might as well just shut down state government and declare ourselves the newly-created federal “Department of Wisconsin.”

The more federal funds Wisconsin accepts, the more it opens itself up for blackmail and micromanagement by Congress.  We all remember the feds threatening to pull transportation funding unless states changed their minimum drinking age and minimum drunk driving standard.  All this federal funding makes Wisconsin the federal government’s marionette.  Whoever holds the purse strings wields unlimited coercive power.

Think about your job.  If you didn’t get a paycheck from your boss, and he asked you to go through the office files and re-sort them in reverse alphabetical order, you’d probably graciously invite him to reproduce with himself.  But since you need the income, you glumly put your head down, mutter to yourself, and suffer through the paper cuts.

The erosion in sovereignty exacerbated by the Legislature this session hasn’t been limited merely to the use of federal funds.  A week before he introduced his current budget, Doyle signed a fiscal appetizer into law, known as the so-called “budget repair” bill.  This bill contained a provision known as the “Streamlined Sales Tax Act,” which increases sales taxes on goods and services in Wisconsin by forcing our sales tax exemption code to conform to other states.  Essentially, Arkansas and other member states will be determining the goods on which we can and can’t charge sales tax.  If our Legislature wants to promote the sale of a certain Wisconsin-made product by granting it a sales tax exemption in the state, too bad – the Interplanetary High Court of Sales Tax Exemptions must all agree to the changes.  And thus, we’ve sold our sovereign right to decide what’s best for Wisconsin in exchange for a few extra bucks.

In the early 1990s, Wisconsin was perhaps the most admired laboratory of democracy in America.  Wisconsin had the first school choice program, giving poor parents the right to send their children to better schools.  Welfare reform in Wisconsin was so successful, the state’s plan served as the model when Congress overhauled the federal welfare system.

In the ultimate irony, Wisconsin itself has now transformed itself into a welfare recipient.  Unwilling to do the hard work to balance his budget, Jim Doyle now sits at home all day in sweatpants, working on his correspondence art school Tippy the Turtle drawing, waiting for that federal check to come through.  And as long as our elected officials are willing to sell off the sovereignty that made our state great, this disturbing trend will continue.

At least until Nancy Pelosi tries a cheese curd.

The Bird and the Bee: Polite Dance Song