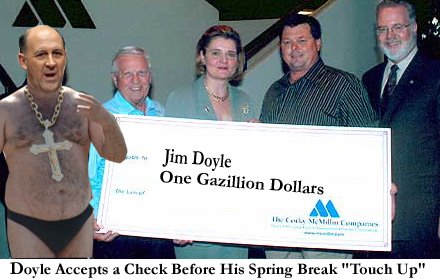 (Madison) – In news that shocked both state government observers and members of the genital hair community, Governor Jim Doyle has been found to be trading campaign cash for valuable state contracts. Sources say that that Doyle awarded the state bikini waxing contract to his personal hair removal service, \”Eddie\’s Landing Strip\” in Boscobel.

The bikini waxing contract has become lucrative due to Doyle\’s recent initiative to provide free bikini waxing to the poor and homeless. In his State of the State address, Doyle announced the creation of \”BikiniCare,\” saying \”it is time that the poor have access to all the accoutrements that rich people do – except, of course in irrelevant areas such as public education.\”

Doyle reportedly accepted a check for one gazillion dollars in February, when he went in for his pre-spring break wax job. The service preceded a gubernatorial \”trade mission\” to Cancun, where Doyle sampled many of the delicious tequilas for possible import to Wisconsin. When he returned last week, Doyle noticed he had 237 new phone numbers programmed in his phone and can\’t remember entering a single one. He also returned with a \”Ludacris 4-ever\” tattoo and a mysterious rash.

When contacted for comment via cell phone, Secretary of Administration William Bablitch said, \”Yeeeeeeeeeow!,\” adding, \”son of a bitch that hurts!\”

\”This deal stinks to high heaven\” said gonad hair-removal expert and president of Common Cause Jay Heck. Heck unveiled his new plan to keep large checks from corrupting the political system. \”From now on, checks must be under one foot by three feet in size,\” said Heck.

Gubernatorial challenger Mark Green immediately took advantage of the revelation, vowing to remain hairy until after the election. Green challenged Doyle to sign a \”truth in grooming\” pledge, which would cap the amount of hair removal by each candidate.

Fun With The Kids, Part II