While there are a few websites out there dedicated to fact-checking Wisconsin political ads (including Charlie Sykes’ “Politicrap,” to which I have contributed), it’s hard to catch all the ads that are circling the airwaves.  In fact, a good campaign will keep the accusations flying, so that by the time someone can actually test their veracity, it seems like old news.

But there’s one accusation that caught my eye in the past few days that needs some attention.  An ad run by the Greater Wisconsin Committee (funded with $1 million of Governor Jim Doyle’s campaign money) claims that Scott Walker once voted to “deny women mammograms,” and to “cancel” their policies. 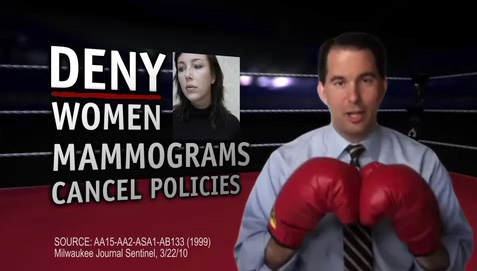 This vote was part of the kabuki dance that goes on with every state budget.  A caucus (in this case, Assembly Republicans) gets together and agrees to their version of the budget.  When their negotiated agreement comes to the floor, the minority party (in this case, Assembly Democrats) offers dozens, if not hundreds, of amendments to the budget package – knowing full well that none of them will pass.  The purpose of offering them is solely for campaign season, so they can use them against members of the majority party.  (Who knew they’d keep this one in their back pocket for 11 years to use against Walker?)  Oddly, nobody in the state media considers the hours they spend taking these votes to be “campaign activity,” when, in fact, these votes exist only to hammer lawmakers in political ads.

To show this is a bipartisan phenomenon, take the 2009-11 budget bill deliberations.  When 2009 AB 75 (the budget bill) came to the floor, Republicans offered over 120 amendments.  One by one, the Democratic majority tabled them.  So each Democrat voted “against” those amendments in the same way Scott Walker voted “against” mammograms.

But let’s look at what Scott Walker voted “against.”

In the 1999 budget, Assembly Republicans sought to include a provision that would have helped small businesses purchase affordable health care for their employees (see page 128 of the amendment here.)  The “Private Employer Health Care Purchasing Alliance,” as it was called, would have had the Wisconsin Insurance Commissioner solicit bids from plans that wanted to take part in the program.  If an employer took part in the program, the employer was required to offer health insurance to any employee that worked more than 30 hours per week – and pay for between 50% to 100% of those employees’ health care premiums.

However, in order to provide more flexible plans to keep costs down, some of the plans were allowed exemptions from state-imposed mandates.  For instance, every health plan in Wisconsin must carry coverage for chiropractic service – which adds cost to health plans.  Mammograms are another state mandate, and health plans were allowed to take part that did not cover them.

However – and this is important – plans offered by employers had to include at least one plan with the full complement of state mandates.  From page 132 of the bill, line 22:

The department shall ensure that at least one health care coverage plan includes all of the coverages specified in subd. 2. (the list of mandates.)

What the bill attempted to do was to keep costs down by offering flexibility within plans.  If you are a young, healthy, male, you wouldn’t be forced to buy a plan that makes you pay for mammograms.  If you’re a female who’s never taken a drink of alcohol, you wouldn’t be forced to pay extra for a plan that covers services for alcoholism.  And if you didn’t want to pay for a chiropractor, you wouldn’t have to.  Although legislative Democrats purport to want to keep health costs down, every mandate they add raises the cost of health insurance.

However, the bill ensured that if you did want coverage for all these things, there would be a plan available to you through your employer.  (If your employer didn’t take part in the program, you’d have to purchase health care just like you do now – but with the full complement of expensive mandates.)  The amendment Walker voted to table would have moved many of these procedures back into the “mandated” category – but his vote didn’t deny mammogram coverage to a single woman in Wisconsin.  In fact, if the program were to be administered correctly, it would ensure that many more women received better health care through their employer for a lower price.

Oh, and it’s worth mentioning that the final budget that year was such a horrifying document, it passed by an overwhelmingly bipartisan margin – 82 to 17 in the Assembly.  And it did include a version of the Private Employer Health Care Coverage Plan.