My Day as a Celebrity

Some of you might remember this post from last year, when I jokingly suggested I should be a “celebrity” cashier at Bratfest.  (For those of you not from Wisconsin, “Bratfest” is a giant festival where residents of nearby Madison risk their lives by ingesting hundreds of thousands of sausages in unison.)

Long story short (too late, I know) I actually got an e-mail from the Bratfest people this year, asking me if I would be a “celebrity” cashier.  I explained to them that my post was actually tongue-in-cheek, but they insisted that I met whatever the nearly nonexistent bar for whatever a  “celebrity” is these days.  (I am on TV sometimes, but it’s usually in Milwaukee.  However, my blog gets hundreds of readers a day from people searching for pictures of Valerie Bertinelli, so I assume that counts for something.)

So I agreed to serve as a cashier on Memorial Day of this year, from 1:00 to 3:00.  This was a strategic move on my part.  Congresswoman Tammy Baldwin and Dane County Executive Kathleen Falk were going to be there at the same time – so I figured that everyone would go stand in the lines of the real celebrities, and fewer people would stand in line to see me.  (As it turns out, if I am actually famous for anything, it is my legendary ability to avoid actual work.)

As the days drew closer, I started to dread my upcoming cashiering shift.  Sometimes the lines at Bratfest get really long – just imagine someone who stands in line for 20 minutes hoping to meet a genuine celebrity, and they end up meeting me.  I legitimately started having panic attacks.

I tried to think of things I could say if people asked me who the hell I was.  If someone gave me a hard time for being a nobody, I would just apologize and promise to be famouser next year.  If someone asked me where they might have seen me, I figured I\’d tell them they may know me from any number of Amber Alerts.

I also tried to think of what I would say to Tammy Baldwin if we actually met beforehand (despite being in politics for over a decade, I have never met her.)  I generally try to have entertaining stories on hand just in case I meet actual famous people – just so I don’t sound like an idiot. (Still working on my story for if I meet Sinbad.)   At first, I was going to joke that she was killing more people in one day with bratwurst than she was going to save in a decade with the health care bill that just passed.  (I scrapped this one.)  I then decided to relay a story told to me by a friend about her almost Rain Man-like ability to remember faces and names.  Figured that was safer.

I showed up for my shift hungry, thinking I\’d be able to down a brat beforehand.  I was wrong.  I went to the volunteer tent and picked the charity I would be cashiering for (Hospice Care of Dane County), got my XXL t-shirt (it was all they had left), and they threw me right in to the cashiering. 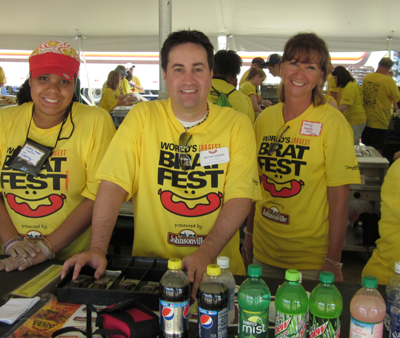 The system they have is really slick – to your left, they have someone to run and get drinks.  To your right, someone to go get the food.  All you have to do is count how many total individual items someone gets, look at the handy pricing cheat sheet, and come up with the price.  The only challenge was when someone ordered the “Double Johnny” (two brats on one bun), which cost $3.  Fortunately, having worked several cashiering jobs in the past, I was adept at making change.  I actually felt sorry for the politicians who are asked to cashier, because it seems few of them are good with numbers.  (Although many of them are skilled at delivering pork.)

As it turns out, all my customers were great, as were my drink and food getters.  It was a good thing it was so busy, since I probably would have gotten in trouble if I had ample time to crack wise.  (There was one large teenage girl who proudly featured a giant hickey all over her neck – I literally had to bite down on my tongue from commenting.)

Sadly, with all the commotion, I wasn’t able to meet any of the other celebrities.  (I spoke briefly beforehand with NBC 15’s Chris Woodard, who said this was his second year doing it.)  Every now and then, I snuck a glance down the row and saw Baldwin’s somewhat-unruly mass of blonde hair at the end of the line.  And it’s true – her line always had the most people in it.  But by the time my shift was done, she and everyone else were long gone.  And thus ended my dream of one day befriending Tammy, and going canoeing with her as we laughed uncontrollably about old movies while the setting sun served as a backdrop.

While my shift was tiring, I was really glad I did it.  It appears when Wisconsinites get in line to get a sausage, the person serving them is actually superfluous.  Nobody asked me anything about what I did or who I was – they just wanted to get their hands on some meat.  And it appears record numbers of people did so – the final count of brats sold was 209,376, eclipsing the previous record by around a thousand sausages.

So thanks to the folks at Bratfest for allowing me to crash the party, Salahi-style.  Next year, maybe Tammy Baldwin will be sitting in her office thinking about what she’s going to say to me.  Although if I’m any more famous, it will probably be for my ability to do the robot.

The Perils of an Undercover Lover

Cloudy With a Chance of Crony Capitalism