How Eric Davis can Save America 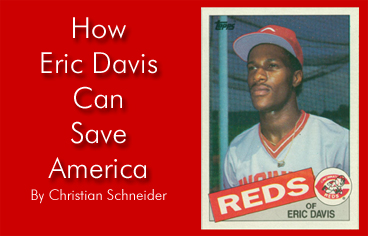 1987 was a big year for the Cincinnati Reds’ athletic young star Eric Davis. The graceful, lithe outfielder was coming off a breakout season in which he hit 27 home runs and stole 80 bases. He was a combination of power and speed the league hadn’t seen in some time (and wouldn’t see for at least one more year, when a skinny rookie named Barry Bonds would make his debut.) In their 1987 season preview, Sports Illustrated called Davis “the Michael Jordan of baseball.”

It just so happened that Eric Davis’ emergence coincided with the explosion of the baseball card industry in the late 1980s. Baseball cards had been around in some form for over a century; but a variety of factors (most notably the loosening of the Topps card company’s monopoly on card production) propelled baseball card trading into a lucrative investment opportunity for kids and adults alike. By 1987, a Don Mattingly rookie card, issued only three years earlier, could fetch $90. After his historic 49 home run rookie season, Mark McGwire’s 1985 Topps Olympic rookie card shot up to 30 bucks apiece.

This is why, in 1987, I went to a baseball card show and shelled out $13 for a 1985 Topps Eric Davis rookie card. I checked the card’s value religiously from month to month. The value continued to climb as Davis hit 37 home runs and drove in 100 runs in 1987 – MVP-type numbers in the pre-steroid era. I felt I was sitting on a gold mine. I was already planning what type of Porsche I would buy on my 30th birthday and Davis was on his way to the Hall of Fame.

Full of pride at my purchase, I sought out my Dad, in order to brag. I told him I had a card that was worth twenty bucks. It was then he said something that would remain with me for the rest of my life:

“It’s only a piece of cardboard until someone’s willing to pay you 20 bucks for it.”

And there you have it – market economics summed up in one sentence. You can spend a lifetime reading Friedman, Hayek, or Von Mises; but if you want to save yourself days off your life, just heed my Dad’s advice. Nothing has an economic value beyond what someone is willing to pay for it. “Value” is simply an implicit contract between the buyer and seller. The same holds true for employment – nobody is really “underpaid.” You either work for what your boss is willing to pay you, or you don’t. That’s your “value.”

I suppose it could be argued that everything I know about markets and economics came from baseball card collecting. At age 14, I had a massive collection, complete with card value spreadsheets and the like. My card trading negotiations with my friends likely resembled the Iranian hostage negotiations. They often dragged on for days, and involved insults, flattery, and every other negotiating tactic one can invoke. Thank God I hadn’t heard of waterboarding.

I bought Mike Greenwell rookie cards in the way Warren Buffett snatches up undervalued stocks. I tucked them all away, waiting for them to appreciate in value, as they almost certainly had to. When I finally took a class in college on investing in stocks, I just said “ooooh, it’s just like baseball cards.” Only a little less cutthroat.
In the late 1980s, major newspapers noticed the link between stocks and baseball cards. As documented in Dave Jamieson’s excellent book Mint Condition: How Baseball Cards Became an American Obsession, newspapers ran stories like “Turning Cardboard into Cash: These are Boom Days for Baseball Cards (The Washington Post), “A Grand Slam Profit May Be in the Cards” (The New York Times), and “Cards Put Gold, Stocks to Shame as Investment” (The Orange County Register).

Unfortunately, as happens in the stock market, baseball cards in the 1980s were riding a wave of irrational exuberance. The values were inflated well beyond a level that could be sustained – by 1991, an industry researcher estimated that $1.4 billion was spent on wholesale sports cards for the year ending in June.

But soon, it all came crashing down. The number of new card companies that flooded the market severely depressed the value of existing cards. The cost of card packs soared from around fifty cents per pack to over four dollars a pack in many cases, leaving young boys in the cold. Plus, as Jamieson notes, the 1994 Major League Baseball strike left a lot of uncertainty in the card market, and a lot of animosity towards baseball in general.

As unthinkable as it was just five years before, baseball card dealers couldn’t move any of their product. Card stores went out of business en masse – they are exceedingly difficult to find to this day, and when they exist, they deal primarily in memorabilia. Stock in the Topps company quickly dropped from its high of over $20 per share in 1992 to $4.25 in 1996.

As it turns out, the cards were just cardboard – when the desire of purchasers to pay $50 for a 1987 Fleer Barry Bonds rookie card (which I own) disappeared, the industry came crashing down, leaving many investors broke. (Current listed value of the Bonds card: $12.00)

This is not at all unlike the crashes suffered by the U.S. stock market in 2001 when the tech bubble burst, or in 2008 when the U.S. housing market deflated. In each instance, a crippling downturn was preceded by the same kind of irrational short-term thinking. Greed and myopic thinking caused investors to be overextended and caused them to expose themselves to an inordinate amount of risk. If only Wall Street bankers had collected baseball cards as children – they’d have learned their lessons.

A quick eBay check shows me that my Eric Davis card is selling these days for a cool $2.00. But the lesson Eric Davis taught me in investing is worth at least an extra fifty cents. Maybe one of these days, Congress will get around to having a hearing.

So go ahead, make an offer.

WPRI Column: How Eric Davis Can Save America