You Paid for This: In Dire Economic Times, Legislators Spend Millions to Improve Their Public Images

Recently, WPRI issued a report on term limits (authored by yours truly) that made the point that incumbent legislators are extremely difficult to oust from office, given the advantages they grant themselves in office.

One of the most challenging aspects of running a legislative campaign as a non-incumbent is trying to get your message to the voters. Doing so takes raising money, and paying out tens of thousands of dollars in printing and mailing costs to get your literature to citizens of the district.

Fortunately for incumbents, they have no problem delivering campaign materials to the voters. Because the voters pay for it.

Every legislative session, incumbent lawmakers get to send “legislative updates” and “questionnaires” to their constituents in the form of mass mailings. Of course, nobody would argue that lawmakers shouldn’t be able to keep in touch with their constituents. Virtually any voter would agree that constituent service is a large part of the job citizens expect their lawmakers to perform.

However, a review of newsletters mailed out by legislators during the 2007-08 session shows that these taxpayer-funded fliers appear to have very little informational value to voters. They are essentially general fund-supported campaign literature, bragging incessantly about all the projects legislators were able to bring back to their home districts. They are sprinkled with photos of legislators reading to children, giving speeches on the floor, attending bill signings, and meeting with veterans in their district. They list many of the bills authored by the legislator, with flowery, hagiographic text written by that legislator’s staff.

Some newsletters are mailed out as questionnaires, allowing constituents to answer questions written by the legislator in order to get “feedback.” Of course, these questions are often heavily slanted in favor of the legislator’s personal views. Then, the incumbent can use these manufactured poll results as talking points during the campaign, perhaps even using the database with the poll results as a guide for targeting voters during the campaign. A voter that answers a questionnaire from a legislator saying they believe in the right to carry a concealed weapon is infinitely more likely to get a pro-gun literature piece from that legislator come election time.

These “questionnaires” (which are statistically invalid, since they are voluntary) contain questions such as this one, from Representative Mary Hubler’s survey:

“The governor has proposed that big oil companies be taxed 2.5% per barrel on profits from sales in Wisconsin. This tax could not be passed on to consumers at the pump. Do you agree with this?”

In 2008, WPRI released a study that invalidates nearly every portion of this question – “big oil” will not eventually pay the tax, and the tax could very well cost consumers more at the pump. Clearly, this question is meant to generate a specific answer in support of Representative Hubler’s position, not to actually gauge the opinion of her district. Furthermore, this question is representative of the hundreds of other biased questions found on these phony “surveys.”

During the 2007-08 legislative session, the Wisconsin Senate spent $568,000 printing and mailing these newsletters and questionnaires. The Assembly spent $692,000 on various forms of newsletters, questionnaires, mailing services, contact cards, newspaper inserts, and other taxpayer funded forms of constituent contacts.

In this time period, legislators sent out 152 different newsletters. Some choose to do one large newsletter, while some mail one newsletter and one questionnaire. Others, like State Senator Sheila Harsdorf and State Representative Scott Suder, choose to do multiple newsletters, but target them to smaller specific constituencies.

All total, the Legislature spent $1.26 million in 2007-08 trying to convince their constituents how well they did their jobs – enough to send 191 inner city children to private schools through the Milwaukee school choice program. This constitutes a $1.26 million taxpayer-funded head start over potential challengers vying for the public’s attention. Put simply, the Legislature takes a million dollars from voters in order to feed those same voters a line about how fiscally responsible they are.

A sampling of the 2007-08 legislative newsletters shows some of the following information that was deemed vital to constituents:

State Representative Samantha Kerkman’s newsletter includes a plug for the state’s new 24 hour hotline that allows constituents to call and report fraud, waste, and mismanagement in state government. Any constituent that didn’t immediately call the number and report her newsletter as an example simply wasn’t reading it.

Numerous newsletters get directly to the point, boasting of all the money and projects that legislator has brought to the district. They include headlines such as “Hebl Brings Important Resources Back to District,”and “Hraychuck Delivers for Her District.” Disgraced State Representative Jeff Wood brags about creating $22 million in incentives for renewable energy development in his district.

State Representative Joe Parisi includes a picture of himself with the Dalai Lama. The relevance of this meeting to the citizens of the 48th Assembly District is unknown. 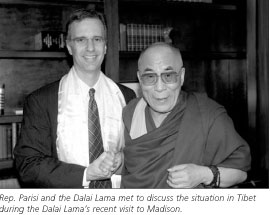 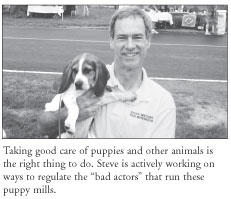 Despite having announced that she wasn’t running for office again, State Representative Barbara Gronemus mailed out a newsletter consisting of nothing but pictures of herself over the span of her 26 year legislative career. This ode to herself cost state taxpayers cost $5,683 to print and mail.

State Senator Jon Erpenbach’s newsletter features a picture of the Senator with a woman dressed as a giant foam rubber soybean, to commemorate a $4 million grant to build a new Evansville Soybean Crushing Plant. 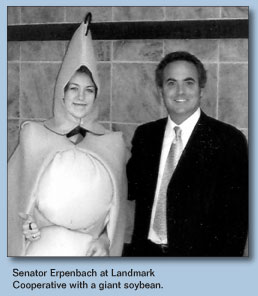 From State Representative Steve Nass’ newsletter: “This legislative session will be remembered for years to come as the resurgence of Big Government in Wisconsin. The taxpayers were under assault from day one with numerous proposals to raise taxes and expand government power. Many of these bad ideas were bipartisan in nature, but bipartisanship didn’t change the fact that Wisconsin families would be forced to pay for Bigger Government.” Cost of Nass’ newsletter to the state’s taxpayers: $5,285.41.

State Representative Cory Mason issued a questionnaire in August of 2007, in which he asks constituents 14 questions, such as, “Racine has the highest rate of infants who die before they are a year old. Should the state invest in programming to reduce infant mortality?”

In April of 2008, Mason issued another newsletter, printing the “results” of his questionnaire. Yet he only printed the answers to five of the 14 questions he had asked six months before. Naturally, all of the answers he revealed strongly backed his viewpoint on those issues. The results of the other questions are unknown.

State Senator Mary Lazich’s newsletter attempts to fortify her law-and-order credentials by featuring a photo of Lazich in an FBI helmet and bulletproof vest. Lazich had the largest mailing budget in the Legislature, at $38,311.99. 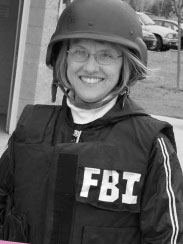 State Senator Mark Miller’s newsletter features a picture of Miller serving his constituents from a canoe. 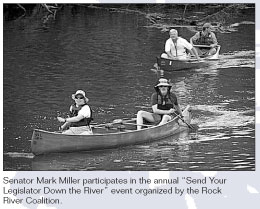 In many ways, these newsletters are completely indistinguishable from campaign literature mailed to constituents’ homes during election season. Many of the pictures and much of the glowing language will end up in campaign mail pieces verbatim. Yet taxpayers pay for these mailings, while challengers are left on their own to raise and spend the necessary funds to print, design, and mail their literature.

It is telling that in a time when the state is in a fiscal freefall, legislators continue to spend millions to boost their own public personas. Taxpayers get to pay for the right to be convinced of the greatness of their own legislators.

UPS Versus FedEx: The Whiteboard Remix