A Perfect Representation of My Golf Game

As I’ve mentioned a few times on this blog, I play in a Monday night golf league.  (I would mention what place I’m in, but let’s just say I don’t want to jinx it.)

On the seventh hole of the course where we play, a family of foxes live.  And when we congregate after our rounds to drink beers, someone inevitably has a story about the foxes – 90 percent of which are apocryphal.  It’s always like, “man, one of the foxes ran off with my ball,” or “my ball went into a fox hole,” or”one of the foxes cooked me up a hamburger,” or some such nonsense.  80% of them are good stories, most of them are 100% false.

But this week, we had a guy walk up to his ball, only to see one of the foxes hovering over it.  After a few seconds over the ball, the fox quickly ran off.  (Presumably, it wanted to catch some of the Sotomayor hearings.)

When he walked up to his ball, the guy saw this horrific sight, and took the following picture. 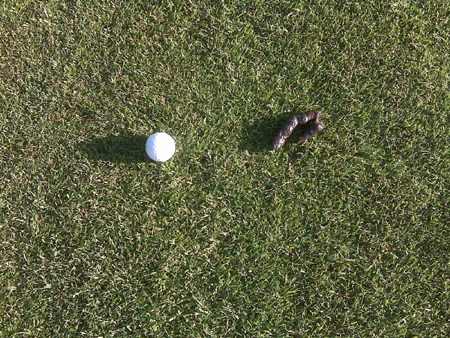 Yes indeed, the fox dropped a deuce on his ball.  Well not ON, but close enough.  Apparently, he was allowed to take an unplayable lie.

And as it turns out, given my score, I did the same thing on the course that the fox did.  Only metaphorically.

Bring on the Stats Nerds