Today was tax day – the day everyone rushes to the post office to file their returns.  That is, unless they work for the Obama administration and are in charge of actually spending that money.  They can get to it whenever they feel like it.

The Lord smiled on the Tea Party held in Madison today, as thousands of people showed up from all over the state to fight higher taxes.  (The Lord hasn’t specifically expressed a preference for lower taxes, although he was irked that one time Jesus got a ticket from the DNR for turning bread into fish.)  Warmth greeted 4,000 people who flooded the Capitol’s East Wing sidewalk to demonstrate against taxes, spending, and pretty much any gripe they have with any aspect of the current government.  Today was the day of airing grievances publicly – if you don’t like taxes, you were there with signs.  If you don’t like gun control, you were there with signs.  If you think the voting process on American Idol is rigged, you were there with signs.

Before the event even began, liberal groups were trying to cut the protest off at the knees.  Wisconsin Democratic Chairman Joe Wineke issued a statement deriding the “tea bag party” as an organized effort bankrolled by conservative interest groups.  As if union protests are completely organic events – like, some union guy shows up on a picket line completely unaware that other people are going to be there.  “Oh, you guys are protesting today?  Me too!”

I got there about an hour and a half before the festivities began.  Capitol police lined the outer rings of the Capitol, just in case they needed to jump in and beat down someone who might be throwing peanuts on the ground.  People with anti-tax signs were already filling up the sidewalk leading up to the doors of the Capitol.  The stage was set up right in front of the doors, with a large video screen on the left side of the stage.  The right sidewalk was flanked by a humongous 8 foot tall sign with orange letters that said NO NEW TAXES, brought here by Citizens for Responsible Government.  Naturally, their volunteers were handing out pamphlets pushing for Governor Jim Doyle’s recall.

At a quarter to 11:00, the thousand or so people who had already gathered began an impromptu rendition of the “Star Spangled Banner.”  Apparently not knowing what their next move was, they began singing “God Bless America,” although clearly fewer people knew the words.  They then, for some reason, followed that up with “Amazing Grace,” and even fewer people knew the words to that song.  I figured that if it kept up at that pace, in about six songs, it would just be one guy singing the theme song to “Titanic” really loudly by himself.

The signs were all fairly standard anti-tax and spend sayings.  They ranged from the poetic (“Doyle is a Boil on the Taxpayers’ Ass”) to the scatological (“Flush the Doylet”), to the confusing-but-true-if-taken-literally (“Washington is on Crack”.  Marion Barry is protesting alone in D.C. with a sign that says “you have a point this time.”)  I was talking with a friend, and saw an execrable sign (“Obama Wants White Slavery”), then turned to my friend and said “I guarantee that sign gets mentioned in the press.”  It took almost a full hour before Wispolitics.com made good on my guarantee.  Wasn’t really a tough prediction – of the probably 500 signs there, that was clearly the one that was going to make the news.

(There was one sign that said “Yes, We Are a Christian Nation,” and I thanked them for holding me in such high regard.)

Speaking of signs and the media, our friends from One Wisconsin Now (an outfit funded almost entirely by union money) were there staging their own protest.  Their executive director Scot Ross was there, along with some of his buddies who were dressed as bankers, complete with top hats and awesome curly mustaches.  They were holding signs that said things like “Don’t Tax My Yacht” and, perhaps most ironically, “Get Back to Work.”  (You may recall the last taxpayer rally at the Capitol, which drew hundreds of government workers there to heckle the anti-tax folks on the taxpayers’ dime.)

Before things got underway, I sat for a while and watched one guy that had an awesome contraption – it was essentially like a bicycle seat attached to this long pole.  So anytime, anywhere you felt like it, you could whip this thing out and sit down on it.  As someone who specializes in laziness, this thing could be revolutionary.  See for yourself: 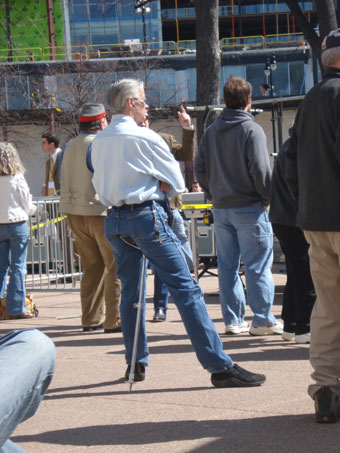 As I gazed at this technological marvel, the loudspeakers began playing Twisted Sister’s “We’re Not Gonna Take It,” while the giant video screen flashed the words.  When this song came out in 1985, I’m guessing Twisted Sister hadn’t really envisioned it as a rallying cry for conservatives to urge lower taxes.  I’m thinking they were probably championing the cause of more irresponsible sex and heavier drug use.  (Finally, someone speaks on behalf of the drugs.)  Just in case the crowd missed the point of the song, they played it a second time, right after the first.

Twisted Sister was followed up by a an audio montage of Jim Doyle’s greatest hits – all of his past quotes about how “we can not, and I will not raise taxes,” and that “Wisconsin’s government problem isn’t that it taxes too little, it’s that it spends too much.”  By this time, the crowd was really getting big, and the boos washed over the people crammed in near the stage.

Then, the Conservative Bat Signal came.  It is the inviolable rule of conservative events – nothing really happens until Lee Greenwood’s “Proud to be an American” plays.  Once the final “God Bless the USA” plays, it’s go time.  Only this time, there was a lag between the song and the speeches.  The stage was still empty, although the sound checks had all been completed.  It took every ounce of self control for me to not run up to the microphone and start yelling “don’t take the brown acid, man!”  Sadly, I think few attendees would have gotten the joke.  Or they would have been stabbed by the Hell’s Angels, who were providing security for the day.

Finally, a crowd gathered on the podium, and Americans For Prosperity director Mark Block introduced the day’s first speaker, fiscal dreamboat Paul Ryan.  As Ryan walked out of the Capitol an on to the stage, the One Wisconsin Now guys berated him via bullhorn, blaming him for high unemployment in his district.  Ryan strode up to the podium, and immediately announced that “everyone is giving me teabags.”  This elicited only a fraction of the muffled laughter I expected, although it may have earned him an entirely new constituency that he has heretofore never courted.

Ryan gave an impassioned speech not unlike many of the speeches he’s given on the floor of the House.  It could have only been a couple minutes, then he was gone.  Following Ryan were a host of speakers, including Wisconsin GOP Chair Reince Priebus.  Priebus had a tough task ahead of him – a good number of the attendees in the crowd equally blame Republicans for the shoddy state of government finances, and he received a couple cat calls to that effect.  But he did a really good job of throwing out the red meat, and by the end of his speech, seems to have more than won the crowd over.

After Priebus spoke, I began winding my way through the crowd to try to observe some of the sights.  The faux-bankers at One Wisconsin Now were giving media interviews, accusing everyone at the rally of being the wealthiest 1% of wage earners.  (Apparently, the liberal groups are unaware that they RUN THE ENTIRE GOVERNMENT now.)

Just by scanning the crowd, you could see that, if anything, these people were the exact opposite.  They are just regular people afraid of losing their jobs – something government employees rarely have to fear – and hacked off at having to pay more of their money to a government that is using it to drive the state’s finances into a ditch.  Aesthetically, they had the look of 4,000 regular, main-street folks – for the cost of Governor Doyle’s trip to the Masters golf tournament, you probably could have bought them all haircuts.

As radio talk show host Vicki McKenna took the stage to wrap things up, the crowd was clearly tired and angry.  The sun had been beating down on them for hours as they listened to speech after speech of depressing (and accurate) descriptions of our government gone bad.  McKenna’s speech hit all the right notes – pointing out all the hidden policy in the budget, urging people to take action, and ordering them to go in and talk to their legislators.  She got a big ovation, then rally attendees broke up and started going their separate ways.

Will it make any difference in the budget?  Not likely.  All of the legislators sympathetic to the protestors’ causes were in attendance – but none of them actually run anything anymore.  Around late July this year, the budget is going to pass in something close to its currentform.  As a result, all these people will be back – probably with a few thousand more of their friends.

Are Taxes to Blame for the Packers’ Bad Season?