Podcast: The Go! Team and Deerhoof

On this week’s podcast, we bemoan the lack of love songs in indie music, and discuss new albums by The Go! Team and Deerhoof.

Best Albums of the Year 2010 Podcast

Our new podcast is up – we were able to get our best albums of 2010 lists online before Julian Assange leaked them.

9.  Laura Marling – I Speak Because I Can

Fundraising for a statewide campaign is always tough. The same group of donors is asked to give, and give, and give again – all to help candidates that likely don’t have a chance of winning.

But Mark Neumann has changed all that with a novel new fundraising appeal.

On Friday, Neumann, who has turned his once-promising gubernatorial campaign into a longshot candidacy worthy of a Fellini movie, debated primary frontrunner Scott Walker. The interview took place on radio talk show host Jeff Wagner’s show and was broadcast from the Wisconsin State Fair grounds.

Shortly after the debate, I received an e-mail from Neumann’s campaign, with the subject simply saying “Neumann Wins Debate.”

(I always get a kick out of these debate “victory” declarations. As I have said a hundred times, we should do debates more like WWE wrestling, where the moderator picks a winner, hands them the belt, then they get to hit the loser with a folding chair.)

The e-mail was addressed as follows:

Mark Neumann won today’s debate with Scott Walker at the Wisconsin State Fair! The debate was aired on radio 620 WTMJ and hosted by Jeff Wagner. It proved three important points, heading into these final weeks before the September 14 primary.

And off it went, explaining how Neumann supposedly destroyed Scott Walker in the debate. (I actually listened to the debate, and it was a bit of a snoozer. Needless to say, I think Scott Walker will be able to show his face again in public.)

But after all the talking points, Neumann’s press release ended up with this line:

P.S. Mark Neumann is a successful businessman who has a conservative plan to cut spending and cut taxes to create jobs. If you like to, please help us continue the momentum from today’s debate victory and donate $5, $15, $25, or $50 by clicking here.

There it is – a novel new approach to fundraising; don’t just ask the “press” to cover your campaign, go ahead and ask them for cash. Hey – reporters and newsrooms seem to be doing pretty well financially these days, why not just throw a casual fundraising appeal on the end of your press releases, too?

I’d love it if Neumann showed up on Mike Gousha’s show on Sunday morning, and after his interview, the on-air closing goes like this:

Gousha: “Mark Neumann, candidate for governor, thank you for joining us this morning.”

Neumann: “Pleasure to be here, Mike – and oh, while I have you here, can I maybe get 50 bucks? And do you validate parking?”

Gousha: “Please get off my set.”

On this week’s podcast, we picked our favorite singers and reviewed the new album from Woods, “At Echo Lake.”

This week’s podcast is a MEGA GRAB BAG (and not in the Al Gore sense.)  We discuss what exactly “lesbian music” is, and review music from Ariel Pink’s Haunted Graffiti, Brandi Carlile, Wilson Kilmer, Joe Jackson, Tokyo Police Club, Hutch and Kathy, The Jam, and Echo & the Bunnymen.

On this week’s podcast, we discuss the Summerfest lineup and how disappointing it is that cats and dogs can get along, and we review the new albums from Tame Impala and Nada Surf.  In response to our question about who the most famous person from Perth, Australia is, the answer is Heath Ledger.

On this week\’s podcast, we introduce the Grossinator, discuss the greatest guitar solos of all time, and review Milwaukee soul band Kings Go Forth\’s new album \”The Outsiders are Back.\”

Other links referenced in the podcast:

On this week\’s podcast we discuss the new album from the Florida band Surfer Blood, \”Astro Coast.\”  We agree that they sound like a combination of Journey, Pavement, .38 Special, Band of Horses, R.E.O. Speedwagon, My Morning Jacket, the Shins, Paul Simon and Vampire Weekend.  We also discuss Neon Indian, a hippie electronic band that I was much less enthusiastic about.

Listen to it here:

Here\’s a video clip of Surfer Blood that makes me feel 143 years old.

Band of the Week: Real Estate

On this week’s Band of the Week,” we discuss the bands Real Estate and Best Coast.  We also talk about Henry Rollins’ lameness, why our new record label needs a Brooklyn PO Box, and why I don’t want to get involved in any more east/west coast rap feuds.

You can listen here:

Podcast: Our Top 10 Albums of the Decade, Part 2

In this podcast, we finish up counting down our favorite albums of the last ten years.

You can listen to it here:

Podcast: Our Top 10 Albums of the Decade, Part 1

Our much-awaited decade-ending podcast is up.  Listen to us clumsily attempt to explain why we are in love with our favorite albums from the past 10 years.  This is part I of our two-part podcast, and covers albums number 10 through 6.

Listen to it here:

I lent my amateur music criticism skills to my friend Will’s “Band of the Week” podcast this week.  We talk about concerts, CD collections, and the band “Girls” that I would recommend everyone check out.

You can listen here: 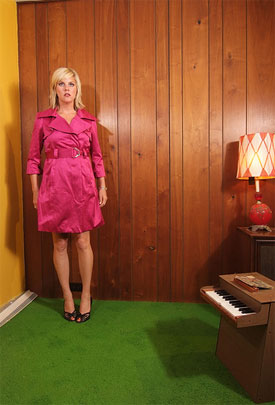 On this edition of the podcast, I talk to Wisconsin girl Trenni Kusnierek of the MLB Network about Michael Jackson, ShamWow, men’s hair coloring products, whether it’s news if athletes cheat on their wives, what the most aerodynamic sausage is, and why Leslie Visser is the Mother Theresa of sports reporting.

A quick note – as I mention in the podcast, I still can’t seem to figure out my stupid recording program.  So there’s a small lag between our conversations, and a bit of an echo on her end for the first half of the interview.  But don’t let it dissuade you – it’s not that big of a deal.  And I promise I’ll have it worked out by the time I interview my next WORLDWIDE celebrity.  (Probably President Obama at this pace.)

Enjoy, and have a listen here:

Getting to First Base With My Readers

There are plenty of wonderful “old guy” things technology is obliterating.  For instance, back in the day I had mastered the art of the mix tape.  You’d go get a blank tape, pull out all your CDs, and spend hours recording just the right mix that you just knew was going to make a specific girl instantly fall in love with you.  Or, at the very least, give you a little awkward over the shirt action.

The rules for mix tapes were varied.  Nothing too scary, nothing too wussy.  In his book “High Fidelity,” author Nick Hornby laid out some of the guidelines:

I think I have the answer.

Dear reader, in order to thank you for coming to this blog and to show my appreciation, I have made you a mix tape and put it here on the blog.  This is someone therapeutic for me, as I love combing through my music collection and crafting just the right playlist.  Hopefully, after listening to this first one, you’ll hop on your bike and we’ll ride together down to Open Pantry and share an Icee.

If there were a general theme for this first one, it would be singer/songwriter type stuff, since that just happened to be what I started picking out at random.  And I even kept it to the usual 74 minute CD length, too.

Listen here, then e-mail me to tell me when you’re available to make out.