Getting the Government off Welfare 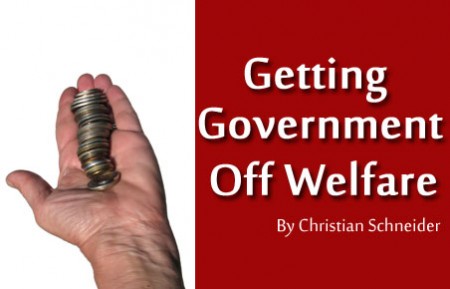 Remember back when you could use the word “welfare” in polite conversation? Back when to show concern for one’s “welfare” was to genuinely care about their well-being? Now, being deemed a “welfare recipient” is more damaging to your reputation than being called a shoplifter, or a slow driver, or even worse, an “ex-Viking quarterback.”

It was the widespread welfare reform of the 1990s, led in large part by states like Wisconsin, that permanently altered America’s public assistance lexicon. To lawmakers, being a welfare recipient connoted laziness, sloth, and an unwillingness to change one’s ways. Taxpayers were imbued with the idea that they were paying people not to work. Now, not even the most dedicated liberals will use the term “welfare” to describe social programs.

But that doesn’t mean there aren’t people still out looking for government handouts in order to avoid having to change their ways. Only this time, the people looking for the most welfare now are representatives of other levels of government.

It was only two years ago that Wisconsin Governor Jim Doyle tried to inflate the severity of the state’s deficit in order to pick Congress’ pocket for more cash. When the stimulus funds he sought did show up, the Governor plugged them into ongoing spending commitments, leaving a budget hole of over $3 billion for his successor. (Ironically, on his way out the door, Doyle is trying to make the deficit look smaller than it is.)

Furthermore, it was only when President Obama dangled more federal education money in front of the states that Governor Doyle began to discuss accountability in Wisconsin’s schools. Doyle, who had been invisible on education issues for seven years in office, feigned outrage when the feds saw through his last minute charade and denied Wisconsin any “Race to the Top” funds.

The federal funds Wisconsin were able to procure merely allowed the state to avoid making any structural changes to correct their fiscal course. Paying close attention were Wisconsin’s local governments, which have been operating under a similar framework for years.

In the current biennial budget, Wisconsin will send 55.3% of all the money it collects back to local governments. While generally in the name of “property tax relief,” such a framework thwarts true innovation in local government.

Have you dug your school district into an unfunded liability five times larger than the district’s operating budget? Doesn’t matter – your state check’s in the mail. Have you resisted merging police or fire services with your surrounding towns? Doesn’t matter – check’s in the mail. Does your city elect criminals while they’re sitting in jail? Do you want your payment in large bills?

It’s as if the system is a mousetrap set by mice. If the state ever tried to cut spending, the locals will simply make it up by raising property taxes.

With the electoral wipeout in Wisconsin last November, there are a lot of changes afoot for state government. Pushing more government to the local levels should be one of the fundamental structural changes that should be considered. GOP lawmakers should heed the advice of Milton Friedman:

Every level of government now appeals to the level above them for cash to avoid making the tough decisions needed to balance their budget. Locals plead to the states. States pleads to the federal government. And the broke federal government has essentially sold itself to China to pay all the bills for the governments below it. (Soon China will have to appeal to the International Justice League to pay all the world’s bills. Let’s just hope Senator Batman isn’t busy the week they take the vote.)

As much as practicable, the level of government that raises the tax should be the one that spends it. That’s the only way Wisconsin will end up with real accountability in its system of taxation. Until then, state and local governments will continue to sit at home watching Real Housewives of New Jersey reruns until we stop bailing them out.