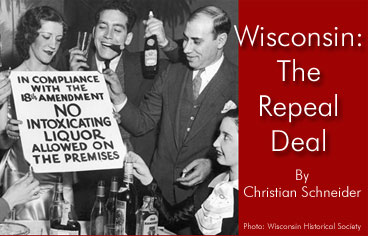 The ink had not yet dried on the final letter “a” of “Barack Obama” before Republicans began calling for repeal of the massive national health care reorganization bill the president had just signed into law. This seems to be a politically shrewd move for the national GOP, as public opinion polls routinely show widespread opposition to the bill.

Leading the call for repeal is someone who had been one of the bill’s fiercest critics in the months leading up to its passage – newly minted national star Congressman Paul Ryan of Wisconsin. In 2010, only Lady Gaga has rivaled Ryan in terms of national media exposure (and it appears that her only talent is her uncanny ability to avoid wearing pants in public.)

Ryan has smartly re-framed the health care repeal movement, urging lawmakers to “repeal and replace” the recently enacted law. He rightly recognizes the need for Republicans to push actual ideas, rather than being cast in their usual role as nattering nabobs of negativity. In fact, Ryan can be credited as the single reason the GOP at the national level is no longer seen merely as the “party of no.” (Although just saying no to this health care bill may prove to be a political gold mine for Republicans.)

While Ryan’s visage may be new to political observers nationwide, his willingness to fight for repeal of an unpopular law isn’t new to Wisconsin at all. In fact, the Dairy State was the driving force behind one of the most famous repeal efforts in U.S. history. In 1932, it was Wisconsin senator John J. Blaine who drafted the resolution to repeal prohibition, ending over a decade of despair for thirsty Wisconsinites.

In retrospect, it seems crazy that Wisconsin – of all places – would agree to adopt a prohibition on alcohol. Yet on January 17, 1919, Wisconsin became the 40th state to ratify the 18th Amendment. (This came well after the 36th state, Nebraska, ratified the amendment, making it official.)

It is well documented that Milwaukee is very much a city founded on the strength beer industry. In the 1840s, German immigrants flooded to the city, making it the beer brewing capital of the United States. But soon, many immigrants from New England, a stronghold of temperance, began moving to Wisconsin. These new Puritan immigrants, coupled with a World War I-related anti-German backlash that swept through America, gave the temperance movement strong influence over public policy – even when that influence threatened Wisconsin’s most popular industry.

Even when the Volstead Act (the 18th Amendment’s enabling legislation) took effect, Wisconsinites didn’t actually believe the law would stand. In 1922, The Milwaukee Telegram predicted the law would never stand, even as it was going into effect. Ninety year-old Jeremiah Quin wrote the following in opposition to the imposition of prohibition, in language that may be familiar to opponents of the recent health care bill: 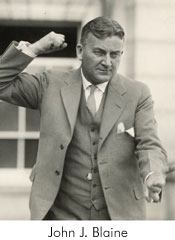 “The manner in which attempts are made to enforce this law is offensive to me as it must be to every man of spirit. From the observations of political movements for more than half a century, I conclude that this form of prohibition will not continue; it is producing a daily increasing reaction against the policies in force. It is the manner, not the morals, that is offensive.”

Naturally, once enacted, prohibition became wildly unpopular in Wisconsin. It virtually killed the breweries in Milwaukee, some of which began to make “near beer,” while others shifted over to making ice cream, soda, and cheese. When Schlitz Gardens closed in 1921, the Milwaukee Journal yearned for the days when the entertainment venue attracted such luminaries as New Jersey Governor Woodrow Wilson (who was running for president at the time, and reportedly refused to actually drink a beer.)

In the pages of the Milwaukee Sentinel in February of 1932, Gunnar Mickelsen offered up this erudite defense of drinking, and why Wisconsin was a miserable place without it:

“Now, it is our theory that Milwaukee was happy because it talked. The urge to hold conversation, to communicate ideas and experiences is one of man’s major motivations. It is behind most of his endeavors and his works. Deprive him of the privilege to talk and you rob him in no small measure of his ambition to do.

What use are actions if he can’t talk about them later? The man’s ego who is satisfied at the mere doing, without telling others or hearing their praise or criticism, is a rare fellow. The happiest persons are those who have something to say, know how to say it, and are given the opportunity to do so.

Beer and wine make for conversation. There is in liquors of mild alcoholic persuasion that which quickens the flow of the thoughts in a man’s cranium, loosens a notch the belt about his reticence, and releases upon his tongue the fruits of his meditations. It is for precisely this reason that men have resorted to alcoholic drinks as a means to make their companionship more vivid and happy.”

Mickelsen, no matter how specious and entertaining his logic, had some important people in his corner. One of these individuals was Republican U.S. Senator John J. Blaine of Wisconsin, who made the repeal of prohibition his personal mission.

Modern Progressives would bristle at any comparison between the conservative Paul Ryan and John Blaine, despite their shared desire for repeal of unpopular federal laws. Blaine, while a Republican, was a steadfast Progressive and a loyal follower of Robert LaFollette, Sr. Born to a farmer with egalitarian beliefs, Blaine’s disabled left arm forced him into professions other than the family farming business. After attending college, he went on to law school, becoming involved in the Progressive wing of the Republican Party. By 1902, he was in Robert LaFollette’s inner “Madison ring” of Progressive confidantes.

Blaine was elected Wisconsin attorney general in 1918 before serving three terms as governor. When his hero, LaFollette, died in 1925, a fight broke out to replace the legend in the U.S. Senate. Blaine struck a deal to support Robert LaFollette Jr. for his father’s U.S. Senate seat, in exchange for campaign help against incumbent Senator Irvine Lenroot in 1926. Blaine defeated Lenroot, and quickly became a thorn in the sides of both Presidents Calvin Coolidge and Herbert Hoover. (In his first session, Blaine voted with the Republican majority in the senate only 35% of the time, or less than any other Republican.)

While Blaine was a forceful advocate for the use of the federal government to overcome the hardships of the Great Depression, it was his opposition to prohibition that finally forged his name in the history books. His fierce opposition to the 18th Amendment grew out of his progressivism – he saw prohibition as a recipe for public corruption and didn’t believe it was enforceable. He also didn’t believe it was the government’s role to enforce morality, saying, “I am opposed to prohibition as a matter of principle. I think it is wrong. I think any legislation that undertakes to regulate purely personal habits of individuals is wrong.” He believed that prohibition fostered “an orgy of official corruption in national affairs never before equaled in this country.”

In every session he served in the Senate, Blaine introduced a resolution to repeal prohibition. It wasn’t until the 1931-32 session (his last, incidentally) that his resolution was adopted and sent to the states for ratification. He lost his seat in a Republican primary in 1932, and died two years later at the age of 58.

While Paul Ryan is the face of the modern “repeal” movement, he isn’t the first Wisconsin elected official to face down the federal government in opposition to an unpopular law. American society changed forever because of John Blaine’s willingess to fight for your right to party. (College students all over Wisconsin can be seen honoring Blaine’s memory every weekend by getting hammered and singing “Sweet Caroline” at the top of their lungs at bars.)

Even with Blaine’s tireless work and public opinion at his back, it still took over a decade to repeal the 18th Amendment. (Furthermore, prohibition prevented individuals from doing something they wanted to do – drink – while the current health care bill forces many people to do something they don’t want to do – purchase health insurance.) It remains to be seen whether Ryan can effectively channel public sentiment in the same way.