We all love Brewers’ catcher Jason Kendall for what he is – he’s a gritty old guy who busts his tail, looks like he eats shards of broken glass for breakfast, grows funny beards, and marks his forearms up with cool tattoos. He’s exactly what we want in Milwaukee – a blue collar guy with a stare so intense, it looks like he’s constantly trying to avenge the death of his childhood family pet. If you worked in the same office with Kendall, you’d be afraid that if you accidentally ate his egg salad sandwich from the fridge, he’d tear your arms off and make you eat those, too.

But while all the things Kendall is are important, it is what Kendall isn’t that makes the most difference to the Brewers. Put simply, he isn’t a major league player anymore. 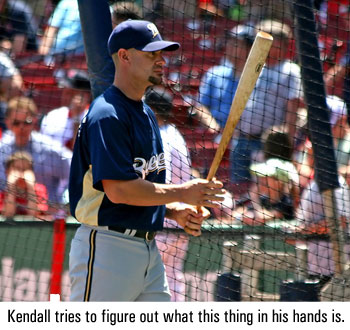 It hurts to say, but Kendall’s career has been dead for two years, but nobody seems to have noticed. (The sport equivalent to “Weekend at Bernie’s.”) In the first nine years of his career, all with the Pittsburgh Pirates, Kendall hit .309, making the All Star team three times (even after suffering a horrific ankle break in 1999). As recently as 2004, his final year with the Pirates, Kendall hit .319, with a respectable OPS (on base plus slugging) of .789.

Then, after being traded from the Pirates to Oakland, Kendall’s career at the plate has cratered. After joining the Brewers in 2008, Kendall has, simply put, been the worst offensive everyday player in the major leagues. His at-bats are so horrible, it often leaves television viewers at home flipping the channel to find something more comfortable to watch, such as a live human birth.

Baseball Prospectus keeps a statistic they call VORP – Value over Replacement Player – that measures how many runs a specific player contributes to a team relative to an average player at that position. According to this standard, Kendall ranks butt naked last among catchers in the National League, with a VORP of -8.5. In other words, Kendall actually costs the Brewers nearly 9 runs per year over just any nameless stiff they could plug in the catcher position. (Kendall ranks 89th out of 90 players to play catcher in the major leagues this year, just ahead of Dioner Navarro of Tampa Bay.)

It’s not as if this fancy pants statistic tells us anything we didn’t know just by using our own eyeballs. It appears that when batting, Kendall is using a bat made of balsa wood. The chances of seeing a Kendall extra base hit are about the same as the chances of seeing a yeti riding a unicycle by your house while smoking a pipe. When teamed up with Mike Rivera, Brewer catchers have hit zero home runs this year. Has any team ever gone a full season without a single combined home run from a specific position? (That’s a legitimate question – I couldn’t find a statistic on that.) UPDATE: Answer in the comments section.

“Baseball people” would counter that Kendall plays catcher, a position from which offense isn’t necessarily expected. (“People like me” would respond that he has actually managed to be the absolute worst at a position where no offense is expected.) So he must be some kind of defensive dynamo, right?

Not exactly. Kendall was run out of Chicago Cubs’ locker room after he managed to throw out only 5 runners out of 57 that attemped stealing – an execrable percentage of 9% runners caught. His time in Milwaukee hasn’t been much better, as he has caught only 21% of would-be-base stealers.

That leaves us with the last place a catcher can go when his skills completely leave him – the argument that he calls a great game. If so, he’s been calling great games for a Brewer team that currently has the second worst ERA (4.84) in the National League, with only the laughing stock of the league, the Washington Nationals, behind them. If the Brew Crew replaced Kendall with Whoopi Goldberg behind the plate, the Brewers ERA rank could only drop one more spot. (As this is being written, Kendall is orchestrating a 9-earned run masterpiece from Yovani Gallardo.)

Sure, there are plenty of disappointing players on the Brewer roster – Bill Hall, Corey Hart, J.J. Hardy, et al. Those guys get the most criticism, only because they have actually shown flashes of potential. Kendall gets a free pass because nobody expects him to hit it past the pitchers mound. (Which provides an important lesson in your life – never do anything well, as you will be expected to do it well all the time.)

To recap: the Brewers have an aging catcher who costs them 15 runs per year on offense, and who is captaining one of the worst starting rotations in the majors. Dr. Jack Kevorkian goes to prison for mercifully euthanizing patients, yet Jason Kendall roams free after quietly killing the Brewers. Where’s the justice? And isn’t there some random Molina roaming the earth?

Last week, I sang the praises of Craig Counsell, and how impressive it would be if he actually managed to hit .300 this year, improving his average by nearly 80 points at age 38. My buddy Matt pointed out how predictable this was once The Grumpy Rooster changed his batting stance. 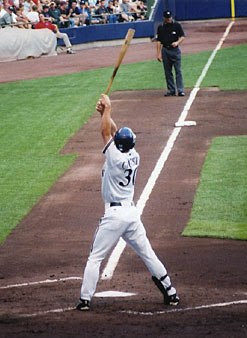 You may recall that in the past, Counsell used to stand completely upright and spastically wave his bat around with both hands over his head, as if he just mainlined three Red Bulls. Nobody in the league had a stance like this – and yet, apparently, it took until we elected an African-American president for Counsell to make the connection that this bizarre stance may have actually contributed to his paltry hitting. It’s almost as if Counsell had been playing the last 10 years wearing red high heels, then decided to give wearing cleats a try. Shouldn’t fans have some kind of redress for a player being so stupid? Some kind of class action lawsuit perhaps?

In my Friday night co-ed softball league, we play with five guys and five girls. Often times, we can’t scrounge up enough girls to play, since girls actually have more important things to do than play softball (like going to bars and ignoring me). In the event that we only have 4 girls in the lineup, when the 5th girl’s spot comes up, they just count it as an automatic out.

As weird as this sounds, I pretty much figure this is how other teams pitch to the Brewers. They just count Bill Hall’s spot as the automatic out. They just imagine that the girl that normally hits in his spot is out at a sorority formal or something, and just count Hall’s at bat as a strikeout. In fact, other pitchers probably get irritated that they have to go through the formality of actually having to throw him the required three pitches to strike him out. The sight of Hall walking back to the dugout will be a familiar one in the next few weeks, as Corey Hart sits out following the dangerous surgical procedure he underwent to have his creepy beard removed.

I know sports are supposed to teach kids lessons about life, but not like this – while watching golf with my 5 year old daughter this weekend, she asked me what “erectile dysfunction” was.  They cram so many boner pill commercials into golf telecasts now, it’s almost a PG-13 affair.  What’s funny is that golf is the last sport you’d expect to have to shield your children’s eyes from, given all the trouble other athletes are getting into. (My daughter knows future Packer Michael Vick as “The guy who is mean to dogs.”)

If they have enough money to blanket network golf coverage with all these ads, can you imagine how many of these pills they’re selling?  Next time you see a 60+ year old guy at the mall, there’s legitimately a 50% chance he’s hopped up on wiener pills, walking around aimlessly, gazing at teenage girls in the same way Wile E. Coyote gazes at the Roadrunner and sees a giant buttery turkey leg.  This has zombie movie written all over it.

But after watching all these grumpy wiener ads, it’s starting to dawn on me – I might be their target audience.  If that’s the case, I might just start taking cyanide pills.

ESPN’s strategy is easy to figure out: they try to get an otherwise indifferent public to care about a specific story, then just beat it to freakin’ death until their network becomes virtually unwatchable (see Favre, Brett.) This has been the case with the Plaxico Burress gun trial – can you name me more than 3 people outside the metro New York area who have given this issue more than 3 seconds’ worth of thought? The guy took a gun into a bar (something that happens every day in Wisconsin), and ended up hurting only himself. And now, we get a full day’s worth of interview clips from teammates about the role of Antonio Pierce, who helped Burress to the hospital. It’s ridiculous – if Burress played for the Kansas City Chiefs, one wonders if the story would make the network at all.

Here’s a really interesting story from NPR about the guy who invented the box score.

Any guess why they don’t have “Kiss Cam” at WNBA games?

One of the articles from the “Best American Sports Writing 2007” compilation came from a blog just like this one.  It goes into great detail regarding the famous Gas House Gorillas versus Teatotallers game in 1946.  It is brilliant – although a little long.