Note: I will be on Sunday Insight With Charlie Sykes this weekend to talk about you know what.  Chances of me swearing on the air stand at about 80 percent.

When the Bubbler first asked me to write something for Wednesday, of this week, I gladly acquiesced. Then, Black Tuesday hit, and word spread that Brett Favre had officially become a purple headed warrior.

Tuesday night found me sitting in front of my computer, staring blankly at my laptop screen, my head buried in my hands. I felt like the last guest at a 1979 three-day party at Paul Molitor’s house. I was confused and disoriented. I started using my tooth brush to comb my hair. I accused a house plant of re-arranging my CDs in reverse alphabetical order, just to mess with me. I started to actually believe it’s not butter.

People who know me know that I am rarely at a loss for words. But I had none. How was I supposed to bring a fresh perspective to a story that had been reported and blogged by thousands of others? How was I supposed to describe the deeply personal grieving process each Packer fan was dealing with on their own?

The task proved too immense for the cognitive limits of my own skull. It was bigger than me. It was bigger than Melissa Joan Hart during her pregnancy. I had to seek outside counsel. I turned to a place that deals with monumental concepts, like the meaning of life, whether we actually exist, and why food served as a “smorgasbord” is less appetizing just because the word “smorgasbord” is so terrible. I needed the world of philosophy. In 1882, Friedrich Nietzsche published “The Gay Science,” in which he uttered his most infamous line, “God is Dead.” In making this assertion, Nietzsche was attacking the underpinnings of Christianity – that is, that God served as the basis for meaning in the lives of Europeans for centuries. Without God, Nietzsche argued, all universal perspective on things would be lost – thus, there would be no objective truth on which everyone could agree. People would be guided by their own perspectives, rather than those supposedly created by God.

Clearly, Nietzsche had Green Bay Packer fans in mind when he cooked this theory up. (Although his mustache really cries out “Oshkosh.”)

For 16 years, Brett Favre was the one thing on which all Wisconsinites could agree. He was the fabric that held us all together – regardless of race, religion, or vertical leap, we pulled for him every week. Brett Favre was our universal perspective. And now he’s dead to us. Much like Nietzsche conceived after the death of a Christian God, Packer fans have been cast adrift with the death of the Favre persona. Nothing makes sense anymore. Normally sane Packer fans have been heard to say things like “I hope the Vikings do well in the games they’re not playing the Packers.” People have started attacking our state’s mayors. The Octomom has her own television show. The State of Wisconsin has been thrown into a state of apocalypse.

(In another freak coincidence, God also has a torn rotator cuff.)

As the story goes, Nietzsche died after a nervous breakdown that caused him to carry jello around in his pants and wander the streets of Turin trying to teach stray dogs to play the harmonica.* (According to some historians, he tried to sign Eric Gagne to a $10 million contract – but others have pointed out that someone clinically insane wouldn’t do something that stupid.)

And now, I know how he feels. The chances of me running naked down the middle of the highway while wearing orange arm floaties and a coal miner’s helmet has increased to better than break even.** Brett Favre plunging Ragnar’s sword into the back of each and every Packer fan has left us a broken, listless state. The only thing we have in common now is our love of bratwurst and cheese curds, the combination of which will kill us within months. Which seems to have been Purple Judas’ plan all along.

Speaking of the Packers, if you caught the exhibition game last week against the Browns, you may have seen Jesse Garcia’s interview with the newly Rubenesque Keith Jackson. Jackson was wearing his old Packer jersey and instead of number 88, he should have been wearing number “Ate-ate.” Jackson now clearly carries more pounds than he does career yards receiving.

This seemed to be a little odd to me, since skill players usually seem to stay in pretty good shape after retirement. Guys like Jerry Rice and Emmitt Smith get to go on “Dancing With the Stars” and live fairly normal lives within the bounds of society.

It’s always the linemen that I felt sorry for after they get cut or retire. Starting at the age of 12, most of them are on ridiculous super-calorie diets meant to fatten them up like a school lunch lady. But when they can’t play football anymore, they just become another giant fat guy with bad knees. Set aside the fact that 99% of their names are completely unknown to the public, so everybody could care less about their post-career well being. They fall victim to health problems, and even worse, women who don’t like fat dudes.

You’re telling me right now that Mark Tauscher isn’t sitting at home in his flannel underwear and slippers laughing hysterically at an episode of “Brooke Knows Best” while his cats lick KFC grease out of his unkempt beard?

By the way, has anyone else figured out how weird it is that the best Packer and Brewer players seem to resemble each other? Think about the years that Brett Favre and Geoff Jenkins were leading their respective teams, and being confused for one another.  An example:

Now, 2009 NFL MVP Aaron Rodgers and Ryan Braun bear a strong resemblance, although Rodgers seems to be much more of a neck beard enthusiast, with his various facial hair creations: 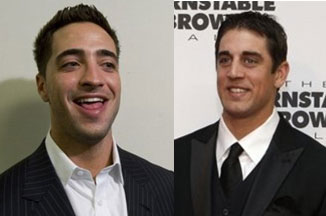 More importantly, in order to keep this phenomenon alive, the Brewers have 20 years to find an all-star that looks just like my 3-year old son, who will obviously be quarterbacking the Packers in 2029. (I’m already willing to sell you his jersey – it’s a barely worn #4 jersey with our last name sewn over whoever used to have that number for the Packers.)

Finally, my 5 year-old daughter was distraught by Tiger Woods’ collapse at the PGA last weekend. Not because he lost, but because she wanted to make sure he at least got a ribbon for coming in second place. I told her he’d probably be okay.

San Diego sports columnists apparently are experts on when Wisconsin fans should be upset with Favre.

This sets a promising precedent for those of you looking for the nude Johnny Jolly photo spread.

You, too, can teach your lady how to watch football! (Via KSK)

The NCAA says that 2007-08 never really happened.  Can they invalidate the 10 pounds I gained that year, too?

This column tries to pitch Ken Griffey, Jr. as the anti-Favre, because he promises to do the Mariners fans a favor and stay retired.  But didn’t he leave Seattle for a boatload of cash once already?  I’m just saying.

Nate Robinson pulled the whole “don’t you know who I am” act with police this week.  In Wisconsin, it’s usually just our politicians that do it.

If Wisconsin is serious about promoting public transportation, this is the way to do it.

Police Get a Shock When Taser Briefly Ignites Suspect.  Money quote from the police chief: “Clearly, this is not the way we’d hoped to get started.”

Oh, and for those of you at home keeping score, I hit my first legit softball home run last week.