Jim Doyle’s Democratic Successors: Who Got the Gravy?

So by now, you’ve heard the big news of the weekend. I hit my first career home run in my softball league, and the new season of Mad Men started.

Oh, and there’s the other minor news – apparently, Wisconsin will have a new governor in 2010. (Yawn.) 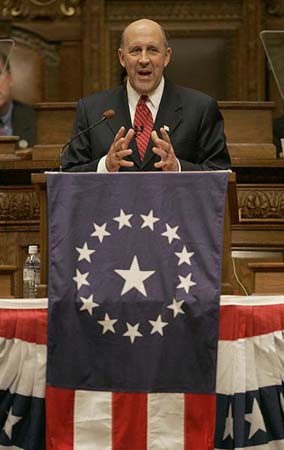 For months, political observers had been wondering whether Wisconsin Governor Jim Doyle was going to run for a third term. It now appears that he is not. As much as Republicans hate to hear it, Doyle will go down as one of the most successful politicians in state history, at least from an electoral perspective. He went 5 for 5 in statewide races, and never lost an election for anything at any time.

His actual achievements are a different story, however. Doyle routinely broke promises to veto tax increases, drove the state into larger and larger structural deficits, and handed out enough special interest favors to his donors to make anyone paying attention want to take a shower. When elementary school students read about Wisconsin history 50 years from now, they won’t be reading about a single achievment of the Doyle Administration. (Assuming kids in 50 years know what “reading” actually is.)

On Saturday, my e-mail inbox began filling up with conservatives celebrating Doyle’s exit from Wisconsin politics. I got e-mails boasting that it’s a “great day to be a Republican” and wishing Doyle “good riddance,” and offering me “natural male enhancement.” (Wait – on second thought, I requested that last one. Strike that one.)

I would offer this advice to people who think Doyle’s exit means a conservative renewal in Wisconsin:

On Saturday, the Republican task of taking back the East Wing in Wisconsin actually just got a lot harder. Presumably, Doyle looked at his approval ratings, which placed him firmly between “amputation” and “cellulite,” and decided to spare himself an electoral defeat next year. It got to the point where Doyle actually probably needed to get his picture taken with South Carolina Governor Mark Sanford to improve his public image. (Doyle currently only enjoys high approval numbers from the much sought after “Spanish train builders looking for sweetheart no bid contracts” demographic.) 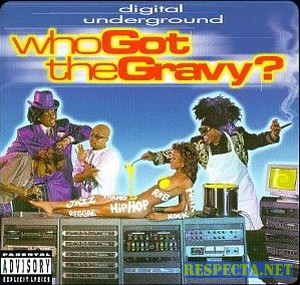 Now, instead of facing a badly damaged Doyle, Republican hopefuls Scott Walker or Mark Neumann will have to face a fresh Democratic face – take, Congressman Ron Kind, for example (see below.) Plus, Doyle could move on to a new position where he could do more damage to the conservative cause than he can as Governor – for instance, if President Obama chooses him to replace retiring Judge Terry Evans on the Federal 7th Circuit Court.

While 2010 could certainly trend more to the GOP, winning the governorship is not a lock, by any means. Remember – Wisconsin hasn’t elected a Republican Governor since 1998, 12 years before the 2010 election. Wisconsin hasn’t voted for a Republican presidential candidate since Ronald Reagan in 1984. So while some see an opportunity to run against a non-incumbent as a boon to Republican candidates, it also so happens that the incumbent was a millstone around the neck of statewide Democrats.

That’s not to say that the presumptive Democratic candidates don’t have shortcomings, either. And since speculation is really the most fun part of politics, here’s a list of the frontrunners for the nomination, with a brief summation of their pros and cons. In accordance with accepted practice among political scientists, their chances of electoral success are graded relative to a scale devised by rap group Digital Underground, from their classic 1998 CD “Who Got the Gravy?”

With Doyle’s resignation, Ron Kind immediately becomes the Democratic frontrunner for the nomination. (He’s been fundraising for a while in the event Doyle bowed out.) First elected to Congress in 1996, he’s a handsome, articulate Harvard graduate that positions himself as a moderate, working with conservatives like Paul Ryan on things like farm subsidy reform. Despite representing a swing seat in Congress, no Republican has even gotten a whiff of beating him in his six elections. 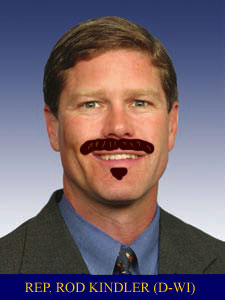 On the other hand, Kind currently has the word “Congressman” in front of his name, which isn’t exactly a selling point these days, given how the U.S. House has immolated itself on the national stage. Even Rick Pitino must be saying “man, those guys really screwed up.”

So don’t be surprised if Kind attempts to erase any public record that he ever served in Congress. His staff is probably going door to door, ripping his page out of Wisconsin residents’ Blue Books as we speak. Visitors to his official congressional website will be surprised to know that they’re now represented by a guy named “Rod Kindler.”

Reporter: “Congressman Kind, can you explain to us the thinking behind the House voting initially for rewarding banking executives with stimulus money?”

Kind: “Look, I’m no hayseed, but I’m not sure I’ve ever heard of this ‘Congress’ you guys keep talking about. Have I mentioned that I like donuts?”

Regardless, Kind remains the odds on favorite for the Democratic nomination. In fact, had he run in 2002, he would have beaten Doyle in the Dem primary.

RON KIND GOT THE GRAVY. 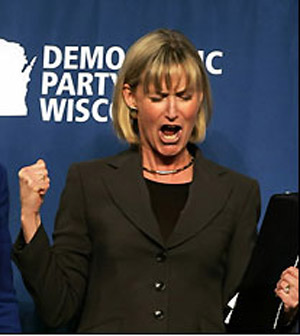 Lawton’s candidacy is only appealing to those confused by the fact that she currently has a position with the word “Governor” in the title. In related news, I have a t-shirt that declares me “FBI: Female Body Inspector,” which I think qualifies me to run the Federal Bureau of Investigation.

Lawton’s candidacy is a punch line to any political observer that has seen her in action over the past seven years. She believes government runs on rainbows, hugs, and patchouli.

Doyle probably has to be reminded once a year who his Lieutenant Governor actually is, as he has relegated her to talking about the arts and pushing for some goofball legislation that purports to pay women equal money for equal work (as if nobody’s thought of that in the past 30 years.) Fairly ironic, since Lawton earns $70,000 a year to do essentially nothing.

The good news is that Lawton’s brand of liberalism doesn’t have any appeal beyond the borders of Dane County. Democratic voters, smart enough to recognize that they actually need to win this election, will politely decline her invitation to hug it out.

BARB LAWTON MOST CERTAINLY DOES NOT GOT THE GRAVY

For as long as America has been a democracy, candidates have told voters they’re “fighting for them.” In Tom Barrett’s case, it is literally true. We all hope he gets better as soon as possible, as he is currently sitting in a hospital room recovering from a heroic lead pipe beating he suffered while trying to save a Milwaukee woman from an assault.

Assuming Barrett recovers fully – and we all certainly are praying that he does – this assault might be something that would appeal to voters. Everyone likes a hero. Many candidates have ridden lesser feats of heroism into office. Plus, people might be afraid that if they don’t vote for him, he’ll punch them.

On the other hand, Barrett already tried his hand at running for Governor in 2002, and was met with indifference by statewide voters.

Through the miracle of modern technology, I was able to actually record Russ Decker’s brain waves regarding his decision on whether to run for Governor:

“So I’ve been busting my tail for the people in the state senate for 20 years, and some kook like Barb Lawton is actually mentioned as a more viable candidate for governor than I am? I’m the freaking Senate Majority Leader for Christ’s sake! I’m the second most important Democrat in state government – and as much as I’d love to run for Dave Obey’s congressional seat when he retires, everyone knows that bearded skeleton is only leaving Congress feet first. He’ll probably serve until he’s 132.
But what if people start figuring out that my fingerprints are all over this most recent disastrous budget? Aren’t I culpable for the huge tax increases and future deficits this budget creates? Are voters really going to elect someone that’s saddled with all the same baggage that Jim Doyle carries around?

And how is it that Pizza Hut keeps coming up with new pizzas to sell us as ‘specials,’ when they’re all essentially the same ingredients?”

(Sorry, I didn’t turn off the thought transcriber machine in time.)

I just wanted to see “Governor Erpenbach” typed out to see if it made me laugh. Mission accomplished.

At this writing, in an attempt to boost his name identification, Erpenbach is wandering around downtown Madison, looking for someone to beat him with a pipe. Plus, he’d have to take too much time out of his job stocking shelves at Woodman’s grocery store in Madison to run for Governor.

JON ERPENBACH GOT NO GRAVY, BUT KNOWS WHERE THE GROCERY STORE STOCKS IT

Of course, with an incumbent leaving, there’s always the chance that someone from the crazy wing of the Democratic Party determines all the Dem candidates are too moderate (read: electable) and decides to run.

On a somewhat serious note, it is sad to see Doyle exit in a state of such ignominy. Here’s a guy from a political family, whose mother served in the Assembly and whose father once ran for governor himself. And yet he so befouled the state’s finances, he really has no choice but to quit. While seeing the state in such financial disrepair may turn out to be electoral gold for the GOP in the upcoming elections, rooting against a governor of either party is rooting against Wisconsin – hopefully, a position our state doesn’t have to face in the near future.