A Long Path to the Long Ball

Admit it – there’s no more special moment in American sports than seeing someone hit a home run.  Hitting a long ball imparts super-human status on an athlete, setting them apart from the rest of us couch potatoes.  In the back of our minds, we all think we could hit a jump shot in basketball or catch a touchdown pass in football.  But hitting a ball over a fence hundreds of feet away requires a singularly special skill, of which only a fraction of a fraction of a fraction of the general public possesses.

To date, it was a skill I had never acquired.  I played high school baseball for three years, although to say I “played” is a bit of a misnomer.  I was a “member of the team.”  When I graduated, I was a rail-thin 5 foot 9, 135 pounds.  Television stations in Ethiopia should have had telethons for me, I was so emaciated.  As such, I was not exactly what you would call a “power hitter.”  And as such, I didn’t exactly get a lot of what you would call “playing time.”  (When people asked me what position I played, I said “left out.”) 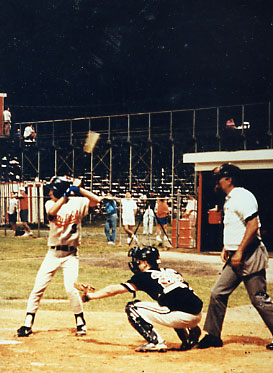 I tried everything to be a stronger hitter.  I sat in class squeezing those spring contraptions that are supposed to strengthen your forearms.  I actually did eye exercises that were supposed to strengthen the muscles around your eyeballs, helping you see the ball better.  (This was before college, when I started drinking alcohol specifically for the purpose of helping me see a lot worse.)

I taught myself to bat left-handed, carrying Ted Williams’ book “The Science of Hitting” in my backpack everywhere I went.  I idolized Williams, because he threw right-handed and hit left, just like I was trying to do.  I wanted to craft the perfect swing from scratch, and broke it down to the inch, using videotape and the illustrations Williams had in his book.  (I taped every Will Clark at bat I could, to try to emulate his swing, as well.)  The benefit of Williams’ system was that you didn’t have to be a big, muscular guy to hit the ball hard – after all, he was rail-thin throughout his career.  The obvious downside was, you have to be Ted Williams to be able to pull it off – he was a freak of nature.

None of it worked.  I languished on the bench, a singles hitter at best.  I tried to stay as active as possible when I could – I’d go out and warm up the right fielder between innings, play bullpen catcher to get relief pitchers loose, and pitch batting practice before games.  (Which was ideal, since my best fastball was a perfect batting practice pitch.)

But sitting the bench was still humiliating.  Especially since the girl I was completely in love with went to a lot of the games.  I\’d be out in left field for warmups before the game, and I’d be able to see her large hairspray teased mane sitting in the stands.  (This was 1989, after all.)  Then during the game, I’d disappear from the field, and she’d never see me again.  As if I was never on the team at all.

My junior year, our team was terrible.  Our coach tried every lineup and combination possible – except playing me.  There was one game in particular that I thought for sure he’d start me, just to give me a shot.  But when I checked the lineup card, my name wasn’t on it.  When I took my spot in the outfield for pre-game warmups, tears started streaming down my face.  If I wasn’t going to play now, I never would – and I proved that for once, there was crying in baseball.

I didn’t even try out for the team my senior year.  Instead, I played tennis.  Working so hard to be a good hitter and not playing was too painful to bear.  This probably caused some consternation with my dad, who was a baseball star at Pius XI in Milwaukee, and went on to play on the team at West Point.  I didn’t pick up a bat again until college, when I played some intramural softball with my fraternity’s team.  We were actually good enough to win our whole university’s tournament and make it to the state intramural tournament.  After that, my career lay essentially dormant until this year, when I signed up to play for the Club Tavern co-ed softball team with some friends.

And so it was this Friday night that a 36 year-old former high school baseball player walked up to the plate.  I would be completely unrecognizable to the 17 year old high school kid I once was.  60 pounds heavier, every bone and muscle aching – after each game, I have to pack my entire body in ice and gobble ibuprofen like they’re tic-tacs.

Ball one came.  I was looking to pull one to right field, as I normally do, which really should be considered cheating – since teams traditionally put the person in right field that is only playing because their spouse is making them.  You get a lot of real beauties out in right – people in wheelchairs, people with one leg, dyslexics, etc.  Trying to hit it to right is as much cheating as using steroids is, with the benefit that your onions don’t fall off.

Then came the second pitch – it was clearly a strike, on the inside portion of the plate.  My devious plan to steal a hit by hitting it to right field was about to come to fruition.  But after it left the bat, it did a strange thing.  It kept going.  And going.

I took one step forward, watching the bright white ball climb up further into the dark night sky.  It was a 10:00 PM game, so the softball complex had all but completely cleared out, leaving only family members and their dogs in the stands.  At the point in which the ball usually starts dropping it kept rising.  Get up, get up…

The right fielder, who had been playing almost with her back to the wall, stopped moving, and looked up – just like you see in major league games when an outfielder watches one sail over their head and into the stands.  I took another step forward, incredulous to what was happening.

Then, the ball disappeared over the right field wall…

It had cleared the wall by a good 10 feet, but had curled around the right field pole.

Two pitches later, I struck out looking.  In slow-pitch softball.

Our team won, pushing our record to 6-1.  But my longball-that-wasn’t kept nagging me.  Just ten feet to the left, and I would have hit my first home run in my life, at any level.  (The fact that it came at age 36 would have immediately gotten me a mention in the next Mitchell Steroids report, I’m pretty sure.  Right next to Fernando Vina’s skinny beard.)  But how many of those dopes that played ahead of me in high school can say they\’re still hitting home runs?  How many of those guys who got all the playing time while working half as hard as I did can still spray line drives all over the field after a decade of retirement?  Most importantly, does anybody know where my girl from high school lives, so I can send her this picture of the swing? (Damn crappy blurry camera.) 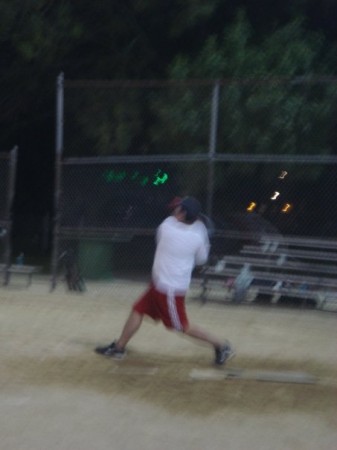 After the game, I went to my car to change out of my cleats and into my sandals.  A girl on my team drove by and asked me if I wanted the ball I hit over the fence.  She pointed to the parking lot across the street, where the softball sat alone, right in the middle of the lot.  Nobody had even bothered to go pick it up.  I ran across the street in my socks, gave it a kiss, and triumphantly held it up – a souvenir that meant nothing to everyone except me.