Given how much I’ve recently thought about how hard it is to get a book published, I considered writing a book called “How Not to Get a Book Published.” But that seemed fraught with contradiction: If the book actually was published, it would undercut its whole premise and render it useless. If it wasn’t published, it would simply remain the private rantings of a crazyperson.

So I wrote this.

If you’ve followed me on social media over the past couple of years, you know I’ve been writing a humorous novel that I think has a great premise. In fact, I became more confident in what I was writing the further I got into it. It’s basically the exact book I would want to read as someone who likes history and jokes. (I refuse to use this post as a blatant platform to advertise for it, so go to the book’s website for that.)

A few weeks back, I finally finished my manuscript (although it is still being read by people I’ve asked to help me edit it.) Yet without an agent and a publisher, it will remain destined for release straight to PDF. The only publishing company currently able to produce it will be the prestigious bubble jet printer in my office. (Which, honestly, is pretty exclusive – it can only print one book every two days, at best.)

The key to being published, of course, is to get yourself an agent. This involves untold hours of combing through literary agency websites, trying to discern which agent would be just the right fit for you. At that point, you must craft your book pitch into the exact format the agent uses to take submissions; some ask for one chapter, some ask for your first five pages, some ask for your first three chapters, and so on and so on. But you have to acquiesce to their wishes – if they asked for the first three chapters in Sanskrit, you better spend the afternoon familiarizing yourself with the language of classical Indian epic poems.

Of course, for most authors, the first five pages don’t even begin to set up the book. One presumes this request is solely to ascertain whether the author can use word processing, spell correctly, and avoid libeling someone for at least 1,000 words consecutively.

The reality, however, is that you will never hear from 99% of these people ever again. Sending manuscripts cold to agents is like sending your bank information to a Nigerian prince, then sitting back and waiting for your $50 million to show up. (It’s almost to the point where I actually enjoy getting rejection e-mails – at least that’s one more potential lead I don’t have to stress over.)

This is especially true of first-time authors. A few years ago, when a friend referred me to one of the country’s most prominent humor agents, the agent told me he liked what he saw, but he only represented “established brands” – properties that had made a name for themselves either by going viral online or by working their way up through the comedy scene. This is why Grumpy Cat has a book and I don’t.

So, in short, the best way to find an agent is easy – all you have to do is already be famous.

Then again, if you have famous friends, this is where you can lean on them for advice. Maybe they’ll give you a referral to an agent they know, which is better than just blindly firing off manuscripts – although chances are, they won’t link you up with their agent, as that means less potential customer service for their books. The “famous friend” strategy is particularly perilous if you’re shy about asking friends for help or even introducing yourself to people you “internet know” and asking for help.

Another friend offered a more helpful tip: Go to Barnes and Noble (they still exist), pick up books in your subject area, and flip right to the “Acknowledgements” section. Authors almost always thank their agents in these sections, so write the agent’s name down, go home, look him or her up, and send them a query.

This has been helpful, although it is a bit emotionally draining to flip through shelves of books you know aren’t as funny as yours. It is a bit of an eye-opener to see what sorts of humor books make it to the shelves; typically, they are nonfiction memoir-type books adorned with some big, cathartic hook as a title. For instance, it appears the most recent trend is to write comedy books about how much you want to punch people: 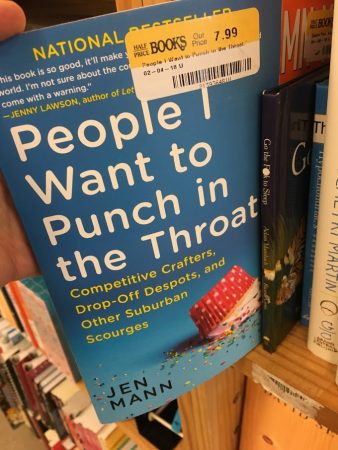 Yet this strategy assumes your book falls into a specific category – a tricky proposition, as many agents represent different styles of books. They say they’re looking for middle-grade fiction, or narrative nonfiction, or literary fiction, or science fiction, or romance novels, or LGBT-based fiction, or whatever.

I’m not exactly sure where my books falls into these classifications. It’s an alternate history, but it’s also a comedy book. It’s technically a work of fiction, but pretty much every story used in the book is something that really happened. It’s essentially a work of true fiction.

In these classifications, “humor” is always included in “nonfiction” – in agent-world, fictional humor appears not to exist. Which is why I am taking this afternoon to punch random people in the face and include their reactions in the first chapter. (If a book company wants to front my bail money as my advance, we can work that out.) 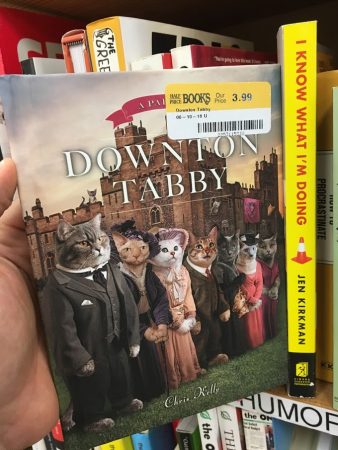 Naturally, sensitive writers trying to classify their works is always an exercise in self-delusion. “How DARE someone ask me to distill my genius into a crass ‘category?’ you might say. “How does one classification do justice to the genius that is ‘Downton Tabby?’”

Of course, while this is all going on, you have to ask people to read the book to see if another living human being other than you can stand it. This is always awkward – when you ask a friend to read your book, you’re asking them to give up hours and hours of their time to help you out. So choose who you give it to carefully. (And if you are one of the people chosen, please note that “will you read my book?” really means “please uncritically tell me how great it is.”)

Further, you should know that once you foist your book on someone to read, that person will likely disappear completely to avoid having awkward conversations with you about your novel. In fact, you should really ask people you hate to read your stuff, as it will guarantee you will never hear from them again.

“AHA!” you’ve probably already said to yourself, preferably aloud and at a salad bar: “Can’t you now SELF-PUBLISH?”

It is true, this is an option in the world of the intertubes. Not only do you make all the money yourself, you’re completely in control of editing and promotion of your work. You also don’t have to wait a year for your book to go through the complete publication process.

But then again, e-books still do have the taint of not having been accepted by a real, live book company. The fact that a publisher saw what you wrote and stamped it with its imprimatur is a big selling point; by releasing an e-book, you are dropping a teaspoon full of words in an Atlantic Ocean of literary excrescence. It just feels like throwing three years’ of work out on to the internet is like giving your book a Viking funeral without the flaming arrows.

So I’ll keep at it the traditional way. Best case scenario, I finally find an agent, the book sells well, and this post ends up making me look stupid. Until then, I will continue to endure this soul-deadening experience with the knowledge that even J.K. Rowling was turned down by dozens of agents and publishers before she finally got her break.

Which is why, if my current book falls flat, you can look forward to by new illustrated book of cat wizards, “Hairy Potter.”