Book End: Imagine a World Without the Printed Page 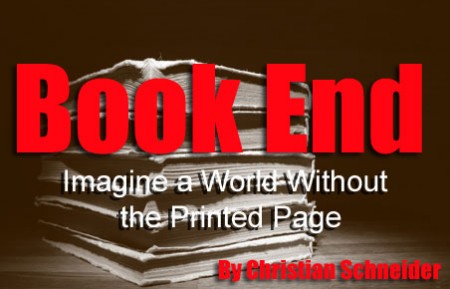 A few days ago, I stood in the local big box electronics store for 20 minutes, gazing at the array of e-book readers lined up on the counter. I felt myself aging ten years per second as I navigated between Nooks and Kindles, gigabytes and dual core processers. In the end, I decided I couldn’t take part in euthanizing the book industry, in which I one day hope to be a participant.

My stolid on-site review of these devices led to an instantaneous reflection on the role of good, old-fashioned books in our lives. The cultural influence of the printed page is impossible to measure; once ink becomes a relic, the unintended consequences could be severe.

Consider, for example, the obvious physical footprint books have on our topography. Some of our largest, most ornate buildings exist solely to house books; at some point, these libraries, bookstores and archives will simply serve as empty, cavernous remnants of the pre-digital era.

When books vanish, no longer will you be able to dazzle dinner guests with your imposing bookshelves full of mahogany-bound Russian poetry. A computer hard drive is a much less exciting conversation piece, and certainly a more difficult item about which to brag. (I always keep a book of poetry in my car, in hopes that if I die in a car accident, the headline will read “Area Man, Lover of Yeats, Decapitated in Horrible Flaming Wreck.”)

On a personal level, many readers will miss the tactile sensation of leafing through books. Devout bibliophiles even like the pain they feel in their necks after perusing bookstore shelves with their heads cranked to the side in order to read the vertically oriented spines. They buy books they will never read, but feel better about having them on their shelves at home. They relish finding hidden treasures left in used books, whether they’re notes scribbled in the margins or clues to the previous book’s owner on a slip of paper used as a bookmark.

The move towards digital books will also likely bring about the same type of information egalitarianism we’ve seen with the internet. In the days of the printed word, publishing was more or less a meritocracy; if a publisher was willing to back a book with the type of cash it takes to print a few thousand copies, it meant it was at least a professional product. (Those that want to point out that a publisher actually issued a book penned by The Jersey Shore’s “Snooki” may have their say at this point.) It will be much more difficult sorting through texts that don’t bear a publisher’s imprimatur, since all one needs to be considered an “author” now is to be able to turn on a computer.

Perhaps most importantly, physical books also provide a cultural permanency that would go missing if everything were stored on digital files. Right now, it doesn’t matter how arcane the issue is about which one might want to learn; somewhere, there’s a physical book that contains that information. Sometimes, the value of certain texts aren’t apparent within the same decade they are written. Yet if the value of historical information was left up to the capriciousness of e-book readers, it could all vanish with a few keystrokes. (Undoubtedly, had the U.S. Constitution been written on an iPad, it would have contained a few more references to Rebecca Black’s “Friday” video.)

Similarly, physical books grant authors eternal life. The literary world is replete with names of writers who received lukewarm reviews during their lives (Nietzsche, Blake, Thoreau), but who became posthumously indispensable. Emily Dickinson’s first compilation of works wasn’t published until four years after her death, when her sister found her secret stash of nearly 1,800 poems. Yet authors in the digital age are just a few “delete” button presses away from eternal extinction.

It seems unlikely that there will be a day where books disappear completely. As long as there are wealthy people, rare books will be sold as commodities and held as investments. Middlebrow texts will become the realm of book fetishists, much as vinyl records are today. But once our cultural mores are untethered from the book standard, we could be set adrift in an age when everything is possible, but nothing is real.

Of course, the primary beneficiaries of the new digital age are the stately trees and critters that live amongst them, who will not be sacrificed to the paper mills. But next time you see a squirrel, see if he can get Tom Wolfe to sign your Kindle.