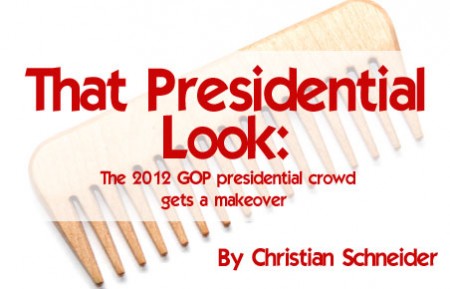 On Nov. 2, Marco Rubio hadn’t yet been declared the winner of his Florida Senate race before the pundits began speculating on his move up the political ladder.

Some penciled him in as a vice presidential candidate in 2012; others thought he could actually be the GOP’s presidential nominee. The Fox News commentators fumed that it was an injustice that a new coin hadn’t already been released featuring the new senator’s visage. (Coming soon — the 15-cent Rubio.)

What would warrant Rubio’s instantaneous inclusion on a list of presidential candidates?

A look at the GOP’s presumed 2012 challengers gives us a hint. For one, this is one darn good-looking crowd. Close your eyes and think of the 2008 Republican presidential debates. The stage closely resembled the cantina in Star Wars. (“Sen. Greedo, the next question is for you.”)

The Republican stage in 2012 will look a lot better. Supernova Sarah Palin is the best example of the GOP’s aesthetic upgrade. Her folksiness has struck a chord with people who feel they’ve been left out of politics, but she’s also given voice to all those smoking-hot women who, tragically, have been ignored by society. (Thanks to Palin, you’re likely to hear questions like, “Sen. Brown, we know you have a sound deficit reduction plan, but have you ever wrestled a grizzly bear?”)

Mitt Romney will be back, he of the chin forged of a futuristic titanium alloy. It seems America could send Romney’s chin alone into Afghanistan and it would come back with Osama bin Laden in handcuffs.

And then there are the GOP’s up-and-comers — Thune, Bobby Jindal and Tim Pawlenty. All are under 50, fit and energetic. (Rumor has it Julian Assange was going to post a picture of Pawlenty’s former mullet, but figured it was just too embarrassing for the guy.)

Mike Huckabee will be in the mix, and granted, he’s not going to be named “Sexiest Man Alive” anytime soon. (Or even “Sexiest Ex-Arkansas governor.”) But even Huckabee recognized that he had to lose about 100 pounds — about two Pelosis — to be a plausible candidate in 2008.

Of course, it seems silly to pick our presidents based so heavily on superficial qualities. Yet as any student of history knows, characteristics unrelated to governing — looks, charisma, erudition — often play important roles in elections.

John Kennedy rode his movie-star looks to the White House. Even before he was elected, Ronald Reagan looked like he should be on Mount Rushmore. And who can forget the molten hot sexuality of Warren G. Harding?

In fact, only two years ago we witnessed what happens when aesthetics trumps qualifications. With only two years’ experience, the handsome Sen. Barack Obama descended from the mount to run for president. He spoke in a buttery baritone that exuded reassurance and seemed worthy, journalists thought, of being inscribed on scrolls made from the pulp of redwood trees.

Yet even with the stern voter rebuke of Obama’s first two years in office last November, the messianic fervor for the president continued unabated.

On Nov. 22, Newsweek portrayed Barack Obama as the six-armed Hindu god Shiva, deeming the president the “God of All Things.” They neglected to show his seventh arm, which would have been in your back pocket stealing all your Rubios.

Unfortunately, somewhere in America there’s a candidate who will never get a chance because he’s too fat, too swarthy or has a bad comb-over. Or maybe she’s a Mama Grizzly who actually resembles a mama grizzly.

Someday, we’ll elect someone cranky and irascible, who has a terrible hairpiece or bulbous nose, but a brilliant vision for America.

Until then, the GOP will have to make do with candidates who could easily be in the “Men and Women of Sound Monetary Policy 2012” calendar. Perhaps for aesthetic reasons alone, it’s best that neither the scrawny Paul Ryan nor the Rubenesque Chris Christie has any intention of running for president. (Standing on a stage together, they’d form the number 10.)

In the first debate, one can already anticipate Jim Lehrer’s opening questions:

“What needs to be done to keep Social Security solvent?”