I have an apology to make. I’m gaining weight. You see, I have a reverse eating disorder – I actually think I’m a lot thinner than I am. For all I know, I could be one of those headless torsos they show on the news when they report that 75% of Americans are going to die of obesity within a year and I just don’t realize it.

I’m trying to do something about it, though. I’m busting my ass, dieting for over three hours a day. I figure a little exercise and a decent diet will keep my arteries from going on strike at some point. 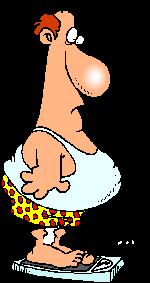 But why would I actually want to lose weight? It’s not like I’ll look any better – that would take a magician, not a dietician. Everyone gets uglier after age 25, anyway. There are no exceptions to this rule. Think about it – who do you know that got better looking after 25? Nobody. (I win!) You can still be 30 and good looking, but there’s no way you are as good looking as you were when you were 24. Send me your pictures and I will scientifically verify this for you. There are some people that lose weight after age 25, but then everyone just remembers them as the “guy that used to be fat,” which doesn’t score you enough points to be worth the effort.

I could try wearing more flattering clothes, but I have no fashion sense at all. I know that when you’re fat, you’re supposed to layer clothing to draw the eye away from your “trouble areas,” but for that to work for me, I’d have to layer myself in an 8’x10′ oriental rug. I have also considered lighting bottle rockets and throwing them at people that approach me as a diversion, but I figure there may be small legal problems with that strategy. I figure I can just hire a really fat guy to walk next to me wherever I go. I’m often tempted to buy expensive clothes, but figure I won’t look good in them anyway, so I stick with my current well-worn shirts that only occasionally have both arms still attached.

It’s not like I’m out of shape. I hate lifting weights – they’re way too heavy. But I can actually run quite a bit. My only problem is actually doing it. My eating habits are terrible. It’s not like I even really need to diet – all I have to do is eat like a normal human being and not like a Tyrannosaurus after a Grateful Dead concert. I actually consider myself eating healthy when I go for the single whopper with cheese and mayo, rather than the double whopper.

Plus, I never really have any incentive to eat healthy. On days that I exercise (usually coincides with a lunar eclipse), I figure I can eat poorly. On days that I don’t exercise, I figure I’m not going to lose any weight that day anyway, and I eat crap. All roads lead to me smothering something in bacon or sour cream. I feel like anything I eat at home is automatically healthy, so I down a half a bag of pizza rolls and call it a win. If I actually eat a banana, I patiently wait at my door for someone to come and award me the Nobel Prize for health.

I actually have a pretty elaborate process for weighing myself. You should always get on the scale as soon as you wake up (you weigh less in the morning), while you’re naked (clothes are heavy), and before you shower (water adds about a pound). While this will make you happy to weigh less, it is problematic when you are trying out a new scale at Sears.

In medieval times, being portly was actually a sign of wealth. Unfortunately, that’s not currently the case, as I would be Bill Gates. I could buy the Brewers with one of my extra chins. This is in stark contrast to my younger days, when I could eat a hippopotamus and not gain a pound. Of course, this was news to the hippo, as he wasn’t dead yet.

I realized it had gotten bad when I was watching an NBA game and the announcer said one of the players had gotten the flu and lost ten pounds in two days. I’m ashamed to admit, that I actually got jealous. I mean, I’m surprised this dieting fad hasn’t caught on – who wouldn’t trade two days of sickness in for three months of dieting and working out? I immediately went down to State Street Brats bar and began licking the toilet.

There are studies that actually show that men put on “sympathy” weight when their wives are pregnant (when a woman gets pregnant, it is essentially a fetal declaration of war on her body. Pinochet was more forgiving). If this is actually the case, I am the Mother Teresa of sympathetic husbands. In fact, I blame my weight gain on the sympathy I have shown for victims of the Hindenburg, for the extinction of the Spotted Owl, and Katie Holmes. In fact, when my wife gave birth, I’m surprised the doctor didn’t point to me and say “you’re next.”

This is the summer, though, that I’m going to get healthy. It will be nice to be able to walk around and not have to hold my breath and try to suck my gut in. One of these days, a caravan of cheerleader buses will drive by me, and I’ll collapse, dead from lack of oxygen to the brain.

When I play with my daughter, I don’t want to keel over like Don Corleone in the orange garden. I figure the least I can do for her is make sure she has a dad around. Or at least stay alive long enough for her to pay my hospital bills when I do finally have my grabber.

Thumbs Up to "A Day Without Gays"